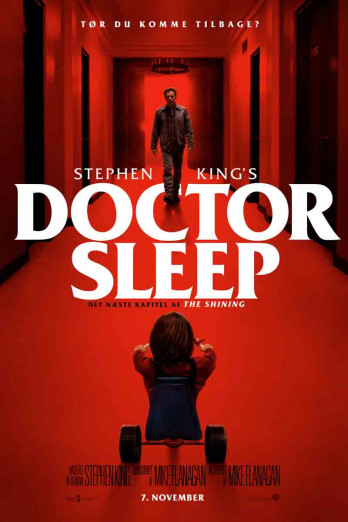 I only found out a few months ago that Stephen King wrote a sequel to The Shining. Stanley Kubrick is one of my top three directors of all time, so it goes without saying that I loved The Shining. Its a really effective horror/thriller with imagery that has survived the decades of cinema that have followed. So, creating a sequel to one of the most celebrated horror films ever was going to be a daunting task for any filmmaker. Mike Flanagan who did quite a job with films like Oculus and Ouija: Origin of Evil took the reigns and its a good thing as well because I think he did a very good job with Doctor Sleep.

The film takes places decades after the events of The Shining and the terrifying events in the Overlook hotel. Dan Torrance is now an adult on the path to sobriety. He has learned to lock away the demonic presences that plague his mind but is contacted by a young girl who can also “shine.” They form a bond but the young girl is being chased by a cult of beings that murder children and feed on their psychic powers. Dan now finds himself using his powers to protect her from this new evil.

As soon as the film opened with the infamous Shining theme I was in. The film is two and a half hours long yet it flew by for me, because I was purely invested in all of it. The performances are great and I loved Rebecca Ferguson’s recent streak as a movie villain. The cult of murderers she leads are pretty terrifying in what they do. The imagery and effects in this film are eye popping, its a wonderful film to look at. The film has so much originality to it to work as a stand alone film but Mike Flanagan still chose to use set pieces and recreations from the original film. I am still mixed about this. While I don’t feel like it was necessary to call back to the original film as much as he does, I still found a nostalgic element to it and was wondrously watching.

I’m trying to think of things about the film I can nitpick about but I’m struggling to come up with anything. Flanagan tells a story and brings images to life in a very satisfying way, while creating a work that has the right to stand in this new Shining universe. I had reservations like many when a sequel was announced but Doctor Sleep works in every way I wanted it to. This is exactly where you would figure Dan Torrance would be as an adult, and I’m glad to have gotten more insight into the mythos of The Shining and the spirits associated.