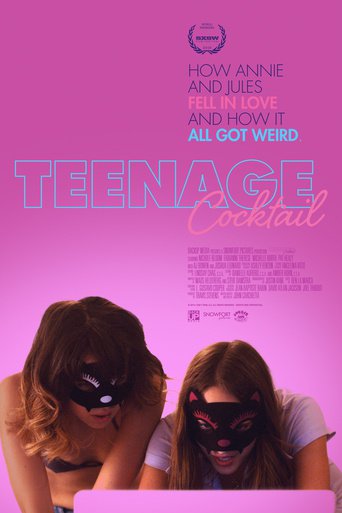 An under the radar film that I’m sure many have not heard about, but hey, it was on Netflix. The premise sounded a little strange but like it could make for a fun time nonetheless. Didn’t recognize the filmmaker or any of the main cast, besides Pat Healy. I dug him in Cheap Thrills but loved The Innkeepers, one of my favorite films from a little horror maker named Ti West. After watching Teenage Cocktail, I liked the portrayal between the two leads in the film but feel like major parts of the film were under-cooked.

The film is about a lonely girl named Annie who one day meets and befriends a girl named Jules. Their relationship is complicated but for the most part they flirt with each other in capacity before they realize their relationship is real. Along the way the girls decide to make money off of being cam girls. The girls want to escape and run away together but problems in their life occur and they need cash. Feeling cash-strapped, the girls decide to offer themselves for money to a random stranger online. Interesting premise, but the ending is too wonky and really doesn’t build on something that was good.

The interactions between the lead actresses is great. You can feel the innocent but naughty connection between the two lovers. This relationship is at times portrayed very visually by great scenes of intimacy with close, personal camera shots and party themed fun and bright lights. The build-up to the film is oddly amusing. Its hard to figure where the film is headed as it makes itself seem to be a coming of age film, then a romance, then a thriller. Its all fine but I feel like Healy’s character left more to be desired. The character has a lot going on but we don’t really get to see a glimpse of his life before or after the ordeal.

Thus, the end kind of just slaps you in the face. It seemed like the script had a good thing going but fumbled closing it out in a satisfying way. I feel like bits and pieces were cut out and that characters kind of turned 180 and you can’t help but feel like the writing is off. It’s still not a bad film, just far from perfect. I didn’t really have any expectations and I can’t say I’m overly annoyed by how things turned out. Its a bit of a mixed bag, but leaning more towards the positive side.