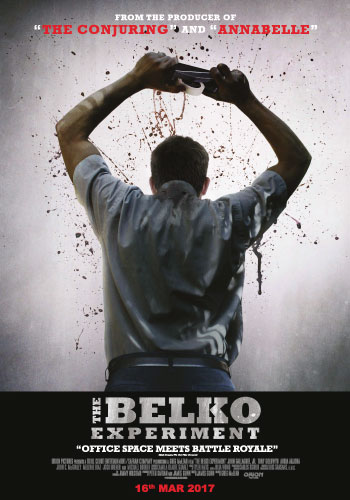 When I first saw the trailer for this my exact reaction was: “Wait, is this really a film?” It seemed like a gore film horror commercial about the workplace. When I learned that it was indeed a real film I was quite interested to check it out. It looked like The Office meets Battle Royale and in many ways that turned out to be an apt comparison. This film is actually kind of original as I can’t kind of think of something like this off the top of my head. Its not bad, but its really just mindless violence that still could have been more fun.

The film takes place at a remote Belko Industries building in Colombia. Everything seems to point towards a regular day at work until a loud announcement comes over the speaker. Two of the workers in the building must be killed, or an increased number of workers will be killed at random. As the game goes along the number and violence increases. The workers all have trackers in their head (how did they agree to this?) that blow up when the experimenters see fit. Pacts and groups are created and random acts of violence are seen throughout and the employees must figure out a way to stay alive in this horrid atmosphere.

This film has a few familiar faces but not anyone overly popular. I like films that take place in an office setting but haven’t really experienced one that takes place within the confines of crazy, gory violence. I welcomed that idea. The problem was none of the cast is really that memorable and seem to just act without any great development. Another thing I expected from the trailer and premise, was for this to be a black comedy with plenty of humor throughout all the violent themes. That is not the case, and I think that hurts the film from being truly memorable.

There’s plenty of gore and violence but you can’t really sit back and enjoy anything because of the lack of humor or lack of characterization. I do like the idea but it could have used more craft. All in all I’m not that critical about this because its a throwaway gorey film which serves its purpose, and I can’t be mad at that because I’m not expecting something perfect with this subject matter.