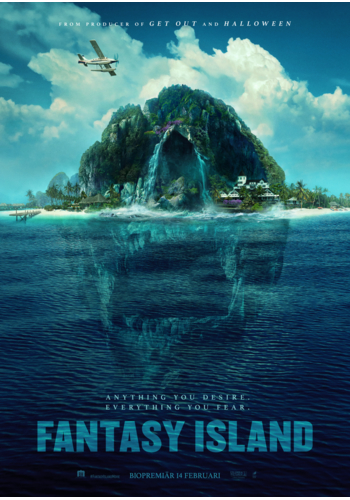 I have never seen the TV show that this was based on but I did scratch my head that they were making an update to it and also hearing that it would be more horror. Okay. Then I was having more doubts knowing that it was from Blumhouse, the director of Truth or Dare, and the lead actress from Truth or Dare, Lucy Hale. I was hoping for something semi decent because honestly the premise sounds interesting and with good writing it could be a nice little niche horror. I’m sad to report that this film is terrible.

The film is about a group of contestants who win a trip to a place called Fantasy Island. On this island the groups get to explore their greatest fantasy and act on it, almost as if it is happening in real life. The “keeper” of the island Mr Roarke, explains the island and soon each of the contestants start to live out their fantasies. Soon they realize that the outcomes of their fantasies are horrifying and there are dark secrets abound on this island where escape seems unlikely.

When the film started I was hoping for the best. Its an interesting plot for sure. However, as minutes passed by and a pair of contestants kept high fiving each other and dropping “bro” jokes and references I wasn’t so sure anymore. The film drops so bad in quality as it progresses. The film fails as a horror film immediately because all the “scares” are done exactly when you expect them to turn up. The acting is pretty bad. Pena disappoints and I think Lucy Hale has always been terrible in everything. The twists that they keep pulling in this film are so bad especially the final fifteen minutes where the plot keeps changing.

The tone is absolutely all over the place. You get a war scene and people dying and then switch Maggie Q relaxing on the beach relaxing with her fake daughter. Also, the amount of times they try changing the fantasies and try guessing whose fantasy they are in, good grief its over plotted and extremely messy. It makes up rules as it goes along and makes less sense as it goes along. Had to roll my eyes at the end. This might be marginally worse than Truth or Dare, which was awful.