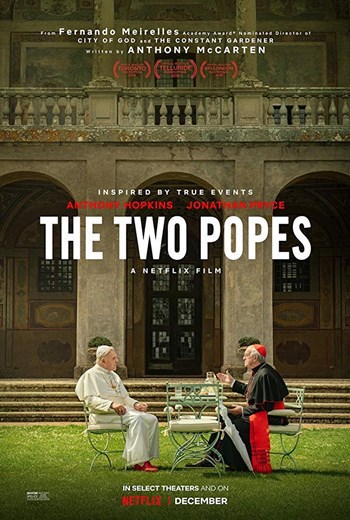 I like that Netflix gets the rights to some quality films. Loved being able to watch The Irishman and Marriage Story (both critically acclaimed films) quick and at my own pace without having to go the cinema. The director of City of God, which was marvelous in its own right, returns with a film based on the interactions between a resigning pope and his successor. This is a humorous and well written film mainly strong because of the two charismatic leads.

The film is about Pope Benedict XVI resigning as Pope and how he chooses the unlikely Argentine Cardinal Jorge Mario Bergoglio as his successor. Both men come from different backgrounds and initially seem to be at odds but through revelations it becomes clear why Cardinal Bergoglio is the rightful man to take the position. This film stars Jonathan Pryce and Anthony Hopkins.

This film is the best I’ve seen from Jonathan Pryce. He is just fantastic in this film and its a testament to his craft that he speaks Latin and Spanish in this film as well. His chemistry with Anthony Hopkins’ Pope Benedict is the highlight of this film. The two play off each other so well and the humor between the two brings life to a film that is written well in its story through flashbacks.

Strong performances aside, the cinematography of this film is excellent. The aura and eminence of the Vatican City is captured through the lens and there is a true human element in the interactions between two very well regarded religious figures. The year is winding down but be sure to check out The Two Popes, its a film that is definitely worth watching for its introspective performances.