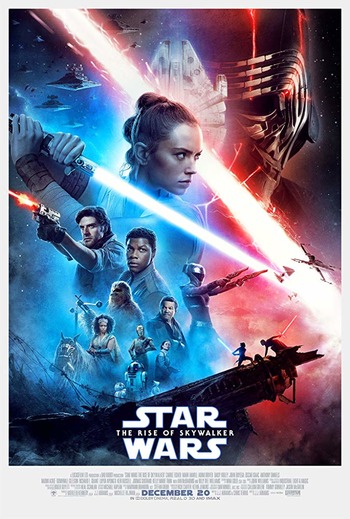 Star Wars: The Rise of Skywalker

One of the most beloved film franchises of all time ends its epic nine film, triple trilogy “Skywalker Saga” with this latest installment. I might be a bit of a Star Wars apologist as I have found enjoyment in each and every installment in the film franchise. Yes, that does include the George Lucas prequel trilogy. The film series has been responsible for so many great moments that will stand in memory as time goes on. The sequel films have done well in the box office, despite being criticized by many fans. I’ve had no real issues with the films so I was hyped for Rise. The time has come for Rise.

The film continues after the events of The Last Jedi. To summarize, the opening scroll: Emperor Palpatine is actually alive, having survived the events of Return of the Jedi. Kylo Ren attempts to seek Palpatine and finds himself butting heads with Rey who is still under Jedi training. Things come to a head on all fronts and secrets come to life as Rey starts to understand her origins, purpose, and must work to find hope and the strength within herself. Most of the regular cast return for this final installment, including Billy Dee Williams returning as Lando Calrissian.

I felt a bit of an air of disappointment watching this film. This is not a bad film and serves its purpose of closing the Skywalker saga but I was just hoping for something much more epic and grand in terms of plot and story execution. I feel like big reveals and important plot moments aren’t done with enough weight and I think things could have been done differently. I feel like for the world this franchise has built for itself, the film doesn’t use its surroundings as much as it should with this. I was just expecting larger scale and something more worth the journey we have come through so far.

With that out of the way, I’ll say the film is well acted. There’s solid fan service for the people who have tuned in all these years and loved the feeling of hope from the first three films. The effects and fight scenes look great. Technically, its just as good visually and sonically as any of the best of this franchise. Definitely, worth a watch in a high quality format at the cinemas. I just feel like moments that are meant to be big and awe inspiring come off as cheap and derivative with this film.

I’d rank Rise under both Last Jedi, The Force Awakens, and the original trilogy. Its on par with and maybe slightly better than Revenge of the Sith for me. By no means a bad film and I think fans will get their money worth. I just wanted the film to be something more than just a nostalgic reminder of why the series is special in the first place. With that said, I am glad for this sequel trilogy which is reinvigorated this franchise and created a lot of magical moments in this Star Wars universe.