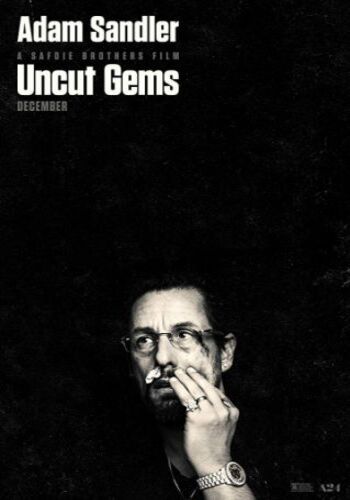 Josh and Benny Safdie s put themselves on the map when they made Good Time. It was a gripping and stylistic thriller capped with a fantastic Robert Pattinson performance. They got a hell of a performance out of Pattinson, who draws criticism for  being in Twilight. So how do they possibly top this? By making a film with the best Adam Sandler performance that I’ve ever seen. Uncut Gems is simply fabulous.

The film is about a jewelry store owner who runs a store in the Diamond District in New York. He owes large debts because of a gambling addiction and is in consistent anxiety and trouble because of it. One day he receives an uncut opal which he plans to auction off for a large sum. Kevin Garnett (yes, Celtics player Garnett) takes an interest in the opal and holds it for good luck which leads to the jeweler gambling on Garnett’s performance in NBA games. This leads to a whirlwind of issues and we have a front row seat to watching it unfold.

First of all, the score for this film is tremendous. Its complemented by the cosmic visuals and the all around aura of something special from the past. This film feels and looks like it was made decades ago but its still feels so fresh and unique. The Safdie brothers are implementing a style of film and covering the dark and shadowy activities that go on with people attempting to get rich or get by. The script is sharp and funny at times and its engorging; it’ll keep you locked in the whole way through.

Adam Sandler brings the best performance I’ve ever seen from him. He stars in a lot of bad films and has talent when he gets serious and this is one where he shines. His character is one with many flaws, but you still identify and root for him. You watch him try to survive in a cut throat world where he is in danger because of the massive debt he owes. Uncut Gems far outshines the Safdie’s previous effort and is certainly one of the best films of the year.