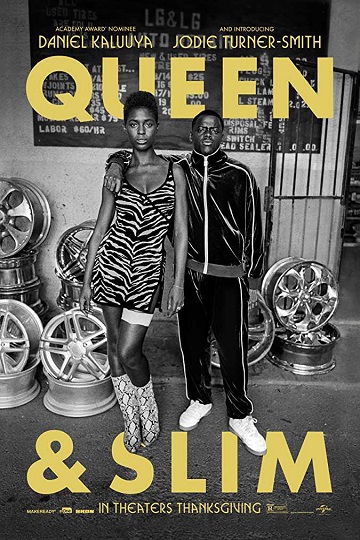 I’ve been playing catch up with films that came out recently and the next one on my list was Queen & Slim. I haven’t heard of filmmaker Melina Matsoukas as she’s mostly directed music videos. This is also the first time I’ve seen Jodie Turner-Smith in anything. The film hits on timely and real issues however I’m not sure if its approach always works. However, its a well acted and interesting film with implications that due resonate in society today.

The film is about a black man and woman on a date. On their way home they are pulled over by a hostile, trigger happy white cop and one thing leads to another and the cop is shot dead and the footage taped in the dashboard camera of the police vehicle. The pair go on the run across the country as they become wanted fugitives. They must try to find help and assistance and also come to terms with the reality of their situation and how it drastically changes their lives.

The performances in this film are top notch. I think Jodie Turner-Smith bursts into the scene and really makes an impression. I liked the lead characters and the emotional weight of the situation they find themselves in. The social and race issues in the film are definitely relevant today, there’s no denying that. However, I felt like the film does rely on that quite a bit and it explores some parts of the issues but disregards other aspects.

Another thing I felt was that the film was quite long and twenty or so minutes could and should have been left on the cutting room floor. Still, this is quite an impressive directorial debut for Matsoukas who finds a voice with what she wants to stay with this film. A modern day Bonnie and Clyde on the run, becoming icons and heroes for a community. Strong messages for sure, just not always delivered to the fullest extent.