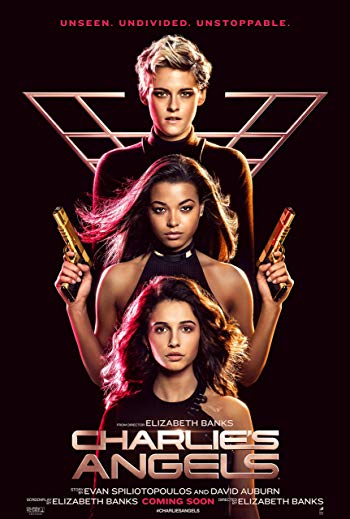 I love the Charlies Angels series from the 1970s. Have seen nearly every episode and while the show doesn’t bring the utmost quality, its a very fun watch. I found the McG films from last decade to be entertaining as well and a bit of guilty pleasures. When this new edition was announced I was going to watch it purely as being a fan of the franchise. Having now seen it, i will say that this is the best feature film adaptation even though it runs into pacing issues.

A new group of Angels are brought together to look into a corporation who are developing a weapon that has catastrophic implications. While learning to band together the trio also learn that there may be secrets within the Townsend agency involving the agents named Bosley (yes this film instills the name as a rank rather than an individual character). The film stars Kristen Stewart, Naomi Scott, and newcomer Ella Balinska as the three Angels.

The film is not a reboot as stated by director Elizabeth Banks. It rather acknowledges all the former Angels of the film and series and takes on new recruits. I liked the trio for the most part and their different personalities make it work. I think the film suffers from some pacing issues as there are stages where the film noticeably drags. The plot is also pretty predictable all things considered. It’s not a wholly original concept obviously but I think Banks does a good job modernizing the film and trying to put a new spin on it.

The film is heavy on the power of women and modern feminism. The characters, while attractive, aren’t purely there to be sex symbols. I think the action scenes were done pretty well, much better than anything seen in the other two films. The film doesn’t really blow you away or really breath a great deal of hope into this franchise but it was an interesting film to watch, especially if you feel nostalgic of what you’ve seen come before.