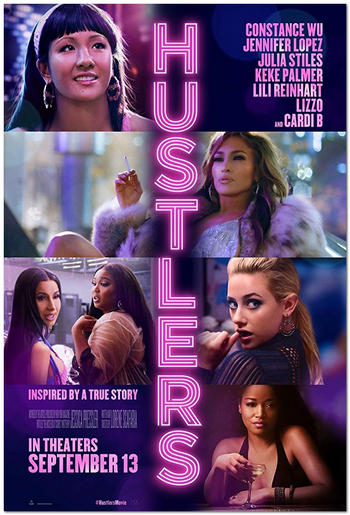 When I heard about this I was interested almost immediately. A film about the stripper world and the crime in it, hell yes. It could have been this generations Showgirls (for the record Showgirls is a pretty bad film but undoubtedly a very re-watchable guilty pleasure). I was surprised to hear some really good reviews about this film so my interest peaked. Unfortunately, I think a lot of it was hot air and its not as good as everyone makes it out to be. There are things to like about it though, its just a mixed bag.

The film is about a group of strippers who band together to make more money for themselves and punish sleazy Wall Street men by drugging them while maxing out their credit cards and building up their wealth. Things become problematic when the group mix with stranger clientele and then get trailed by the feds. The film stars Jennifer Lopez, Constance Wu, Lil Reinhart, Keke Palmer, and Julia Stiles.

The dancing and the look into the lives of strippers in the film is entertaining. Lopez’s pole routine is great and you can tell she trained to perform it. Most of the actresses deliver strong performances and are believable. Outside of Crazy Rich Asians, I haven’t seen much of Wu in this but shes great in this, and one of the only likable characters. Well, I liked Lili Reinhart nervous vomiting character too. You want to see the rest get busted. Its basically a bunch of criminals taking advantage of sometimes sleazy but also other times regular vulnerable men. I also found it funny Cardi B had a small role in this because this is basically a biopic of her life after her admission to actually doing this.

The film gets tedious after a while as it takes too long getting to where it needs to get to and for me doesn’t do a whole lot to get wowing reviews. Its not a beautiful film visually, it doesn’t have a whole lot of style or memorability. Segments are enjoyable but I’m a little curious about what makes the film so good. It felt like something that would be an afterthought soon after. Lets give the film the only real praise it deserves: the cast do well, especially J’Lo who has her best performance since Selena.