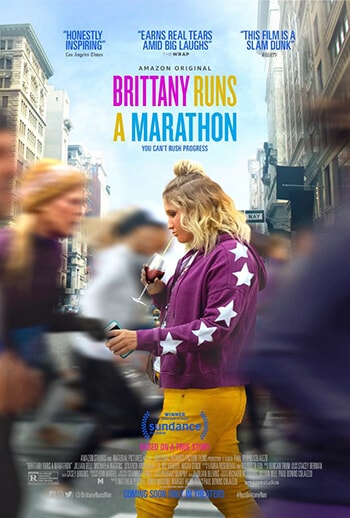 Summer at the movies has come to an end and I can feel it from the lack of films coming out this and next week. However, Brittany Runs a Marathon is something that I wanted to make sure to see for somewhat personal reasons. No, it’s not because I want to lose weight to look and feel better, although sure that’s something good to get to one day. I more so identified with the idea of doing something for yourself and improving yourself, and just having a more all around positive attitude. Its something that I’ve really been focusing on this year and I feel so much better. The film is an entertaining watch and hammers home a few good messages.

The film is about a 28 year old who after visiting the doctor realizes that she needs to start losing weight to avoid serious health problems. The idea of running at first is so daunting and crazy to her but once she gets into it she sees things change, including her friendship, her romantic life, and also what she learns about herself and about the willpower she never knew she possessed. This is the first time I’m seeing Jillian Bell in a lead role and shes absolutely great in this.

The film does a great job of balancing humor and the drama that comes with it. The film is a rather empowering tale of loving oneself. Its not just about the physical gains that come out of taking care of yourself but a lot of it comes from the mind and being in a place where you are truly happy. As mentioned earlier, this is something that is so true for me in this stage of my life where I am consistently looking to improve myself and I’ve been happier than I’ve been before.

Getting back to the film its a nice bit of a character study filled with training montages, awkward romances, breakups of close friendships, and a theme of change. Yes, we’ve heard of all this before in film but Brittany Runs a Marathon does it very well. I do feel like the film loses its way in writing a bit near the end but ultimately it means very well and does a job of entertaining its viewers.