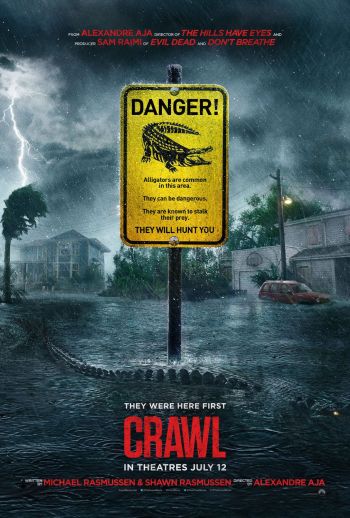 On paper, this looked bad. However, if you recall back to a few years back with a similarly themed film (The Shallows) with Blake Lively and how good that was, I decided to really give Crawl a chance. I think Alexandre Aja is a decent filmmaker. I liked The Hills Have Eyes remake and also Piranha 3D was dumb, cheesy, self-aware fun. Crawl is a very close quarters film and for it works as a short summer popcorn film It basically accomplishes its purpose.

The film is about a girl who goes back to her father’s house to see whats going on with him. A gigantic hurricane is hitting the area and she has not heard from him. Upon going there she finds him unconscious because of a large bite. It turns out the weather has caused alligators from the local gator farm to swim through under their house and into the crawl space. This initiates a game of survival as she must rescue her father and herself from the dangers of these vicious beasts.

The film is done well for what it is. The sequences with the jump scenes when an alligator is impending is done well. Kaya Scodelario and Barry Pepper do a good job and are convincing in their strive for survival. The effects for the alligators is great as the animals look very real and extremely dangerous. The plot sounds dumb; trapped in a crawl space with two alligators who are blood thirsty. Its delivered well though. Its also not for the faint of heart because there’s a bunch of chomping flesh.

The film runs under 90 minutes and doesn’t require much brain power. I’d say this film does elements of horror much better than some of the straight up horror films today, which is saying something. Don’t expect anything remarkable but a decently enjoyable time at the cinema, and you will be pleased. As for me I’ll stay away from Florida during times of bad weather.