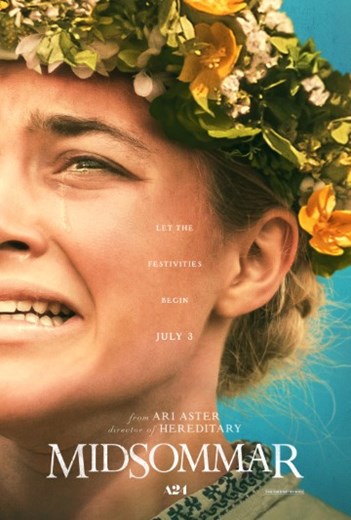 Hereditary was one of my favorite films of last year. it was such a unique and unsettling film. If anything, it showed that Ari Aster was a force on his directorial debut. We all wondered what as next. Midsommar quickly became my most hyped film of the summer and I vowed to see it as soon as it comes out. Midsommar is exactly what I wanted it to be and more. This will be a polarizing film, I feel but I already know that I want to rewatch it because it is truly a mesmerizing experience.

The film is about a group of friends who travel to Sweden for a celebration that occurs every 90 years. The protagonist (played by Florence Pugh), recently experienced a traumatic loss and goes on this trip with her boyfriend in hopes of repairing their very distant relationship. Everything seems beautiful and serene at first but the group soon realize that this festival is not normal at all and the bizarre cult-like events are actually a lot more dangerous than they seem.

Ari Aster shows that he is already an expert in filmmaking. This film is a very loose horror as a lot of it is comedic, abstract, visual, and more unsettling than scary. Its perfect that way and shows the range Aster has. The lighting, setting, and cinematography in this film are absolutely stellar. It is an absolutely beautiful looking picture. Someone else who really shows range is Florence Pugh. From playing Lady Macbeth, to a WWE wrestler, to a girl going through an absolutely traumatic experience.

A lot of this film is humorous. Its hard not to burst out laughing at the uncomfortably bizarre sequence of events in this film. The pagan like rituals in this film are just so engorging to behold and you just want to know more and more at the mythos behind this cult. The film is so unique in its nature but the creativity and imagery flow through, much like with Hereditary.

This is pure unhinged ambition from Aster. He takes the reigns off from what he did with Hereditary and explores a beautifully terrifying event with people who are darker than they seem. The film is a slow burn but its fun to just stare at every frame and behold the transpiring of absolute madness. Its an absolute psychedelic trip from start to finish. Prepare for two and a half hours of weird and freaky. Let the festivities begin.

This is a text widget, which allows you to add text or HTML to your sidebar. You can use them to display text, links, images, HTML, or a combination of these. Edit them in the Widget section of the Customizer.
Loading Comments...
Comment
×
%d bloggers like this: