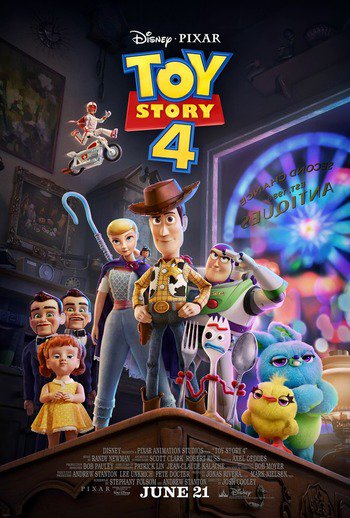 I think most peoples initial thoughts when they heard about this film were along the lines of “is this film really necessary?” After all, the third film in the trilogy seemed to wrap everything up so perfectly and was as sweet and sentimental as it could be. Yet here we were with a fourth installment. I’m sure Toy Story is a lucrative venture for Disney and Pixar so that could have been reason enough from a financial stand point. Having seen it a few days back I have to say, this film continues the trend of quality and I found it to be a perfect mix of emotion, comedy, and loveliness.

Our toy friends are now living with Bonnie, who is now starting school. While at school she creates a toy made from a spork and other surrounding trash. One day, this spork (Forky) escapes and Woody goes after him. Along the way he runs into Bo Peep who was given away years ago. Woody must try to keep Bonnie happy as he is quickly becoming less and less relevant in her eyes. There’s a whole lot more to this film that I don’t want to get into. All of our wonderful toy friends are back, what more could you ask for?

I’d like to start off with how good the animation was. There is an animated cat in this film and just looking at this cat is proof of how far animation has come as a whole. Its incredible. The film provides a good dose of laughs that will please both adults and their kids. I loved the Key and Peele voiced duo and having Keanu Reeves doing voice work for this as well. Buzz has become less relevant in the main storyline but is as entertaining as ever. Forky seems to built from nothing but he is such a complex character in the way he finds his way, don’t let that get lost in the shuffle.

The major toys have arcs that they need to complete. Its such a well written film that did not feel necessary at first but then you see it and feels like it was the perfect ending to the series (if it ends there). Its an emotional punch which goes to show how great this series is at evoking a strong reaction. I liked this film better than Toy Story 2 and maybe even Toy Story 3. It proves itself to be an essential addition, strange as that seems. Just all around a perfectly good time, which for me was great. I do ask that they stop here with the series though.