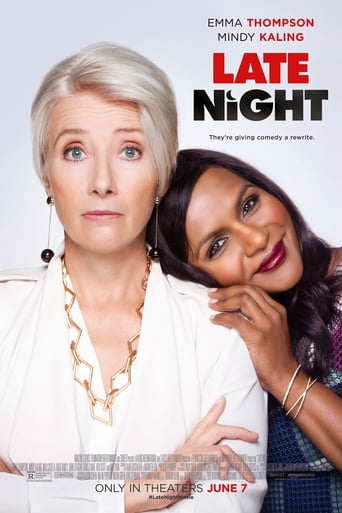 There are a few things coming out this week that I am very interested in seeing but I had to first check out this one from last week. Trailer worked well for me because it sounded original and fresh, yet familiar. An aging out of touch late night host taking feedback from a young person who has been pushed aside her whole life? Lets do it. I’d say this film meets expectations and has a really sleek and polished feel to it, mostly through a most riveting performance by Emma Thompson. However, it still feels uneven.

The film is about a brash and cold late night TV host who is in danger of having her show cancelled because of waning viewership. Enter Molly, an out of left field choice and only female writer on the staff. She must deal with the pressures of being a woman and a minority in a white male dominated work environment and a cruel boss who hesitantly takes her rebranding advice. The film stars Emma Thompson, Mindy Kaling (who also wrote the screenplay), and John Lithgow.

I think parts of the script are strong. The film resonates with me for presenting a cutthroat work environment and the concrete jungle and hardship of staying relevant in the big city. Emma Thompson especially is magnificent. She is such a talent and was just born to play this role. She truly looks and feels like a real late night host, you would think Katherine Newbury actually exists. Kaling is also solid though her writing underutilized the talents of Lithgow and doesn’t know what to do with a few characters.

The film is overall a fun watch, although I feel like it could have been a lot better with some script tweaks and not being so heavy on the nose with some of the points its making. I liked the idea quite a bit and it felt within the realms of reality not just in the entertainment industry but in the common workplace as well. Still, its a testament to the work of Kaling, who puts he best foot forward and has an absolute powerhouse in Thompson making the film worth a watch.