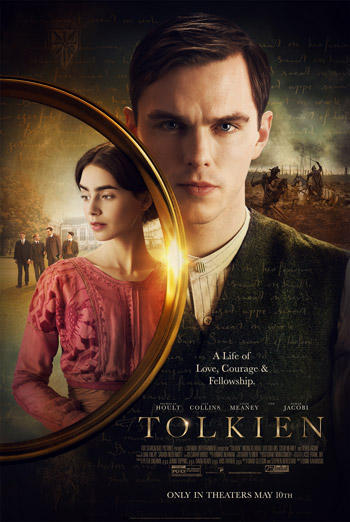 I had doubts about this film based on the trailer. I mean, we all love The Lord of the Rings trilogy and some of us (not me) like The Hobbit series. Was a film about the mastermind behind those books something that we were dying for? Probably not. However, I was somewhat interested in the inspiration for such a grand universe set in Middle Earth and wanted to get a bit of back story to the life of J.R.R. Tolkien. Its a fairly by the numbers biopic but I thought it was decent.

The film is about the life of J.R.R. Tolkien from his humble beginnings as a young imaginative foster child, to his lifelong friendship with a group of boys, to the encounters with the love of his life. Most importantly the film shows Tolkien during the first World War, the horrors he witnesses and how the war influences a lot of the imagery of his future work. The film stars Nicholas Hoult as Tolkien and Lily Collins as Edith Bratt, his wife.

Lily Collins is beautiful. Now that that’s out of the way, lets talk about the film. Its a bit generic and stalls on portions of Tolkien’s life that don’t feel like they needed a lot of focus. I personally wanted to see more his inspiration for writing The Hobbit. The film does try to be inclusive of imagery that is representative of his works during the war, which I thought was a good touch. Ultimately though its easy to get bored with the life and friendship of Tolkien and his mates.

This is the story of a fantastic fantasy writer but gets bogged down on showing other things for me. The imagination of Tolkien and the inspiration for his writing still needed more focus. Its not a bad film by any means but I think it needed to be better. The film probably was not necessary and I don’t see it making LOTR level waves. Its a passable biopic at best but overall needs to capture the magi of Tolkien’s work to inspire. Hey, at least we will finally learn how to pronounce “Tol-keen” though.