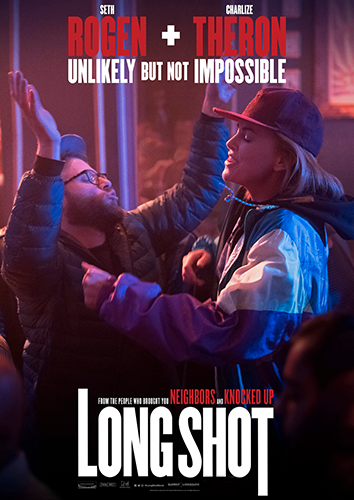 Avengers hangover week is here. This looked like the best of the bunch that was coming out this week. An unlikely duo of Seth Rogen and Charlize Theron seemed like it could have been something worth watching. I’m a fan of Theron and think she can be fantastic and has the ability to go outside the box with her performances. I think the film has a good opening act and seemed really funny and like it could have been well worth the time, until it failed right around the time the pair entered a relationship and went through every trope in the book.

The film is about an unlikely reunion of a recently fired journalist and the Secretary of State and president hopeful. It turns out Miss Secretary of State used to be the babysitter of said journalist stoner. She hires him as her speech writer as she appreciates his brutal honesty and unwavering dedication to his beliefs. Things  get strange when the pair enter a relationship and they must deal with the eyes of the public and think about whether they can even actually be a couple. The film is a Jonathan Levine effort and he reunites with Rogen with this film.

As I stated earlier, the film seemed like a lot of fun in the first third or so. It was laugh out loud funny and I loved the pairing of Seth Rogen and his best bud O’Shea Jackson Jr. The premise is admittedly absurd but that wasn’t the issue. Its the fact that once the love angle kicks in the film becomes ridiculously cliched and unfunny. The jokes and plot starts feeling like it was written by a twelve year old. Rogen and Theron do their very best and both are good in it. There’s just no chemistry between the two despite their best efforts.

The film starts to feel overlong and becomes a predictable plethora of  dick jokes and crappy humor. I was just praying for the end. At least Jackson Jr is good throughout. That man is all about the G-O-P and the G-O-D. The idea was decent and it seemed like it was going places, until it didn’t and just crashed. Very disappointing but its okay, I still have love for Charlize.