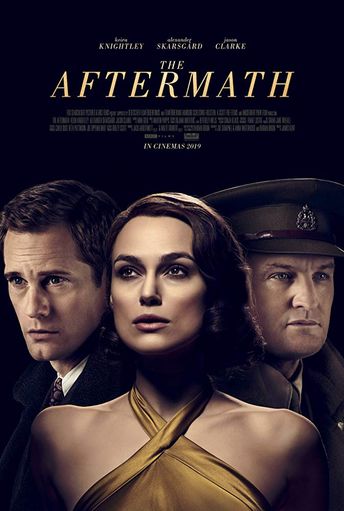 I am a sucker for period pieces and it seems like Keira Knightley is too since she always seems to be in them. The film had a good cast to boot and looked decent from the trailer. I think Never Look Away was the best possible World War II film of the year but hey here was another. Unfortunately, The Aftermath only looks rich in its cinematography and production design. Otherwise, it is a forgettable and dull affair.

The film is about an English woman (played by Keira Knightley) and her husband who is a colonel (Jason Clarke). They take up residence at a house in post World War II Germany. However, the couple decide to let they previous owners of the home to live with them. This starts an affair with the woman and the previous owner in a clandestine manner. The war time political feelings still run high which causes trouble for those involved. The film also stars Alexander Skarsgård.

The film was shot very well. The scenery and production design make the film look of the time and the costume design is also on point. Keira Knightley is a very reliable performer and she is no different here. The film just needed more than what was offered. I found the plot to be inexplicably weird. Oh yes, let me let the widowed really build young guy stay at home with my wife, while I go away for long periods of time. I think the affair part was done well but I didn’t feel chemistry between the characters.

Its a really listless and forgettable film. It also feels uneven with the inclusion of Skarsgard’s onscreen daughter and how that brings up a big climactic event. The film only looks the part but does not bring the quality. I’d like to see Keira Knightley in better things as apart from Colette last year, she has been in a string of bad things. The Aftermath is no different.