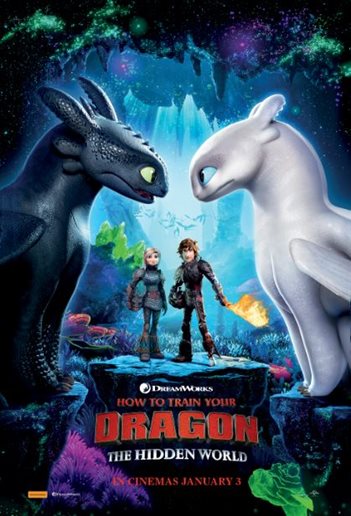 How to Train Your Dragon: The Hidden World

For whatever reason I cannot remember the first two films very well. Had to have a friend kind of refresh my memory. Not the hugest fan of animated films but you know, nothing else was out this week so here I was catching the finale in this animated trilogy. There’s a slow build up but I think overall the third film in this trilogy hits the right notes and serves as a pretty good conclusion to this series (from what I can recall from the first two anyways).

In this film, Hiccup and Toothless continue to bond and free dragons until Toothless meets another female Night Fury (dubbed the Light Fury). Toothless falls in love, meanwhile a a dragon hunter named Grimmel is trying to capture Toothless and kill him. This leads to an all out battle between the two forces, and Hiccup must lead his team of dragons and Vikings to subdue the evil Grimmel.

I do recall chuckling at moments throughout the film. A lot of the younger folks in the theater were really into the action and the characters. I thought the animation and sound were great. I appreciate the effort that goes into making an animated feature, it cannot be easy. I thought the film did a good job of mixing humor, drama, and action. It’ll be an emotional journey for fans of the series because it is touching at the end.

I like that the film series is bowing out when the time is right, take a note Toy Story 4. The film was overall a decent time at the cinema which was all I can hope for. It even makes me want to revisit the first two and refresh my memory on the films. Not all animated films work for me but this was good and judging by the looks of whats to come in that department, this may be one of the better ones.