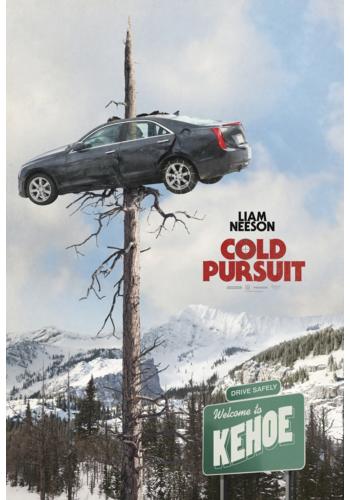 The film maybe about a cold pursuit but Liam Neeson’s recent racial comments but heat to this film (I hope you enjoyed this).  Still, I think the mix of “Don’t Fear The Reaper” and winter time violence made me an enthusiastic viewer of this film. It looked like stupid cheesy fun. It is stupid fun for sure but it does well with comedy and having a pretty interesting revenge plot driving the film.

The film is about a snowplow driver in Kehoe and his discovery of the death of his son from a “heroin overdose.” This death seems unlikely so he investigates and realizes a drug dealer nicknamed Viking is behind his sons death. He slowly kills off Viking’s mean while also getting mixed up in a war between Viking and the local Native American cartel. Film obviously stars Liam Neeson but also stars Tom Bateman, Liam Neeson, and Laura Dern in a small role (she just flipping disappears).

The film feels a bit like Fargo, obviously because of the snowy setting in a small town and the crime that also involves the local police department. Neeson is no stranger to this type of role, a fatherly figure who has been wronged and then takes revenge on the wrongdoing party. I think the film does well enough to also build up the villain and go in depth into the background of him and his rivalry with the Native Americans.

I liked the black card every time someone in the film died. The film gets a little loose with its plot as it goes along. I must have missed it but I swear Laura Dern’s character gets written off somewhere. Also, the final conclusion leaves a little to be desired. Otherwise, its a fairly comedic but stylistically violent remake of its Norwegian predecessor. A fun time at the cinema.