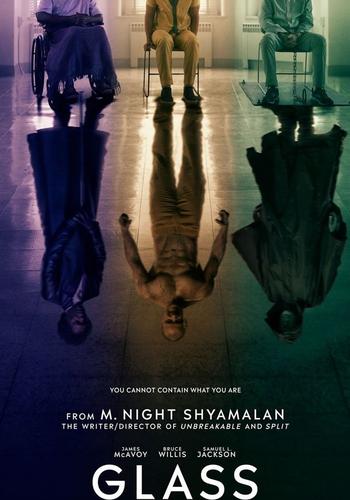 Its been a while since I’ve seen Unbreakable but I loved that movie. M. Night Shyamalan may have slipped creatively in more recent times but he was at his peak around the time Unbreakable and The Sixth Sense came out. Split was decent, I wasn’t as big on it but admittedly James McAvoy was rather sensational in it. I was very hyped for the last film in this trilogy no one even know would be a trilogy. I’ve heard bad things but overall I liked the film. The climax will not please many but I think its a grounded realistic look at how superheroes and supervillains would be perceived in the real world.

The film is about the battle between David Dunn and Kevin Wendell Crumb (primarily his Beast persona). Both are caught and find themselves in a psychiatric hospital where they are receiving counseling to show them that they are not actually superhuman but rather gifted within the realms of normalcy. Also, Mr. Glass, Dunn’s arch-nemesis from Unbreakable, is also housed at the facility. Glass has a nefarious plan that he attempts to put into motion which involves controlling the Beast.

Something that impressed me was the return of child actor from Unbreakable, Spencer Treat Clark. Not something you see often with child actors. Anya Taylor-Joy (who I have an Unbreakable crush on) also returns to connect with her former captor. I thought the film has a really incredible build in the beginning and is an interesting concept. The climax is where people will be disappointed as Shyamalan utilizes his twist in the plot and it has serious consequences. Still, I think its a film that somehow unites two films that weren’t even similar and binds them into a same universe.

This isn’t going to blow anyone away but I appreciate what Shyamalan was trying to do with the characters he created decades ago. The acting is fantastic on all fronts. Though I do get lost in the multiple identities of Crumb, McAvoy once again is fantastic and shows great diversity in quick thinking personality switches. This may be a hate it or love it type affair for some. It could have been stronger but I had a good time with it and the message of the perception of superheroes and villains in the world that it portrays.