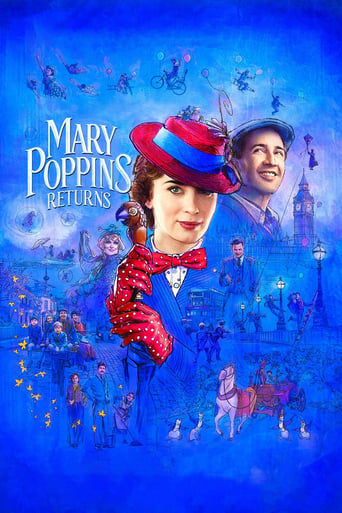 I think I felt the same sort of elation when the teaser for this was released, as everyone else did. The sight of Mary Poppins flying in on her umbrella, and the bombastic score. I was hoping to catch this as soon as it came out. Mary Poppins Returns is high on nostalgia, effects, musical numbers, and visualization. Its very busy on screen and breeds the familiarity of the first film. Its certainly a theater experience but isn’t quite the sweeping spectacle I was expecting.

The film takes place years later when little Jane and Michael Banks have had their own children. Their house is close to being taken back by the bank and the family needs to find a way to save their home. Then comes Mary Poppins who brings back the wonder and magic, this time to the new generation of Banks’ children. The film stars Emily Blunt, Emily Mortimer, Lin Manuel Miranda, and Ben Whishaw. Rob Marshall is at the helm of this big budget sequel.

I think visually the film is a joy, especially on the big screen. The colors pop out, the mix of animation and real characters was very impressive to see. The songs aren’t always memorable and don’t have the impact of the ones from the first film but you can tell mass energy and dedication was put into them. Blunt and Miranda are especially great in their roles, was very fond of Blunt’s Poppins. The film’s plot is essentially simple and I feel like the film takes a bit too long focusing on song and dance without strengthening the narrative like it should.

There is certainly nostalgic elements all throughout the film. This is a family film that will please little children with all the wonder and extravagance on screen, while older fans will have a good smirk at a witty Poppins remark and feel like they are re-visiting their childhood. The film could have benefited from being shorter and adhering focus to its plot which seemed thin at times but overall this film hits its stride as soon as Mary Poppins lands on the grass and takes control.