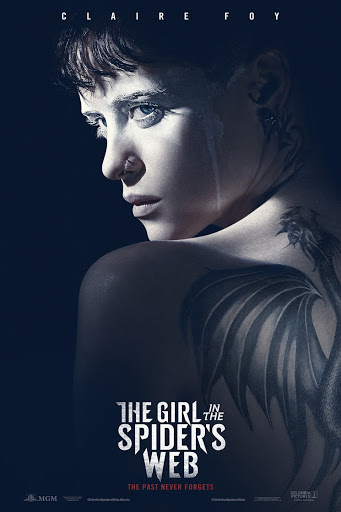 The Girl in the Spiders Web

I have seen the extended version of the original Swedish Millenium trilogy and thought it was really good. Especially the first film. Fincher’s American remake with Rooney Mara starring as Lisbeth Salander was absolutely fantastic. Thought it was a complex and gripping film, with a stellar performance from Mara. I was really not happy about the recast of Mara and Fincher but of course I decided to give this new loose sequel a chance. It’s not a bad film, just too mediocre and it’s hard to not think what could have been with the same crew on board

The latest adventure of Lisbeth Salander involves people trying to get access to a top secret program that has information about unclear missiles around the world. While trying to deal with this, Lisbeth soon realizes that people are trying to kill her and she must try to find out what’s going on. The mystery runs deeper than she thinks, tying back to her troubled childhood. Claire Foy takes over the duties of having the lead role.

I think Foy is a super talented actress and she is good in this film, no doubt. I still was longing for Mara’s portrayal though. I’d say Foy’s portrayal doesn’t have the complexities and unique nature as the Lisbeth that Mara created. The film is simpler but still feels like it didn’t iron out its plot and character development properly. The villains are about as stereotypically generic as they can get. You feel the raw and deep nature of the other incarnations, this feels like a much tamer storyline.

The film isn’t bad and it’s a decent watch but it doesn’t reach the level of the mastery of the original and Fincher’s re-imagining. Its just an all around average watch which shouldn’t be the case when it comes to this series. It’s certainly watchable but needed to be in the hands of someone who could make the mediocre something special, and sadly that’s not the case here. Decent effort but leaves a desire for more.