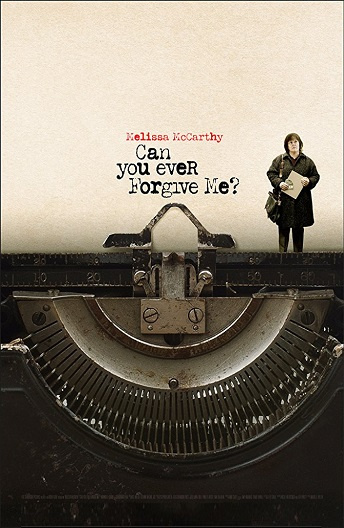 Can You Ever Forgive Me?

I usually don’t end up liking Melissa McCarthy films. She is usually in comedies directed by her husband that aren’t funny and have nothing good going for it. I was intrigued in seeing her take on a more serious role and one based on an actual biographical person than a made up “funny” person. I never heard of Lee Israel or the case of her forgery and all the stuff she got away with so I wanted to learn more about this. I enjoyed this film. Its not anything that’s gonna stick out when the year ends but for a one time watch its fine, and I can finally say I enjoyed a McCarthy performance quite a bit.

The film is about the real life story of down out of luck biographical author, Lee Israel. Her books aren’t doing well and she finds it hard to find inspiration. She can’t afford rent or veterinarian care for her sick cat. She decides to forge letters signed and typed up by famous entertainment personalities. At first she finds the scam to be lucrative but eventually the buyers become suspicious and the FBI get involved. The film basically tells the tale of her forgery, until she gets caught, and the aftermath.

McCarthy does a good job here.  She doesn’t completely disappear into the role but its a believable performance that showcases her best qualities. The film is proficient in mixing comedy with humor and brings forth a rather intriguing plot in a way that keeps you engaged. I already liked Marielle Heller as The Diary of a Teenage Girl was a really interesting  and well made film as it was. I think she finds a penchant for storytelling that mixes humor and drama well.

Its easy to see why something like this would have been easy to get away with in an earlier time. Its an idea people wouldn’t easily think of. Crime doesn’t pay, after a while anyways. If you want to see a solid biopic and an even more solid Melissa McCarthy performance then this is your film. its not anything amazing but its a generally interesting tale about a shady author that you may not have known about.