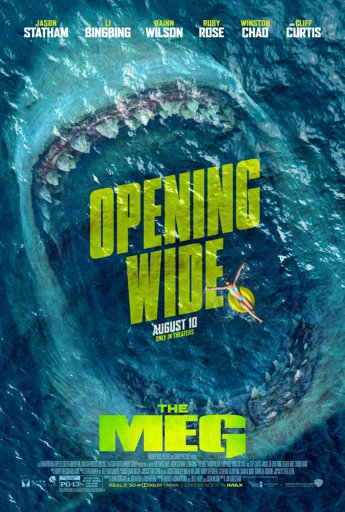 The film event of the summer is truly upon us. Nothing says summer like a campy shark attack film. What’s better than a regular old shark film though? A megalodon! Jason Statham’s newest vehicle just so happens to be this and it seemed like a great “brain off” stupid enjoyment type of film. While I do think it delivers on most of what it should have, I think it needed to embrace its stupidity a bit more and doesn’t have that lasting campy re-watch factor or much of an impact for that matter.

The film is about a group of scientists that discover that deep in the water lives a prehistoric shark (the megalodon) and the shark soon starts to attack humans in its sight. Jonas Taylor (Statham) is a rescue diver who most attempt to find the best way to kill the megalodon before it finds its way to other humans. That’s basically it. Also, Dwight from The Office is in the film as well. Ruby Rose too.

I think the effects for the film especially the shark were really bad at times. I understand that this is meant to be a B film but the film looked like a SyFy channel effort at times. There are moments of sheer stupidity in dialogue, plot points, and character action which make it fun. I do think more of it was needed though. The film spends a good portion of time trying to explain the megadolon, how it arrived, and how to take care of it scientifically. Less of that and more of stupid action please.

Overall, you get what you pay for with The Meg. Its a cheesy summer blockbuster much in the vein of Piranha 3D. My main concern is that it fails to establish itself as something you would want to visit when you want to laugh at dumb things. Basically, The Meg needed to tone down trying to actually be comprehensible and go all out with the hammy nature, shark fun, and gory deaths. What you get shall suffice though.