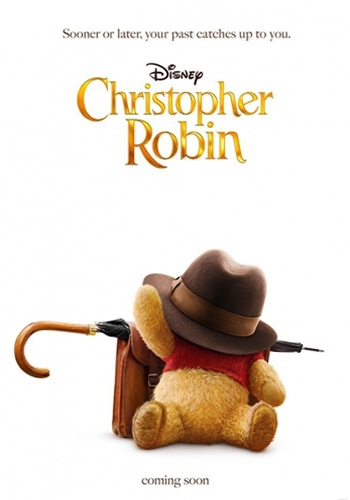 When I first saw the trailer for this, I had no idea what it was until I saw little Winnie the Pooh in live action format. Even with Moviepass blocking this film, I found a way to see it on opening night no less. I felt like having a film similar to something like Paddington (where a children’s book character receives a live action film), would go over well with the crowd just on the basis of nostalgia and having beloved characters present. I felt like this film had a slow start but once Pooh comes into London and runs into a grown up Christopher Robin the film becomes the warm and lovely film we expected it to be.

The film follows the gang of Winnie the Pooh, Eeyore, Piglet, Tigger, Kanga, Roo, Owl, and Rabbit and their reunion with an adult Christopher Robin. At first Christopher cannot believe that he sees Pooh and is dismissive of the idea of returning to Hundred Acre Wood. He struggles to balance his adult responsibility of work and having a family with his childhood love with his animal friends and the adventures that they went on. Interestingly, Jim Cummings returns for the voice of Pooh.

As mentioned earlier, the film is a bit slow in the beginning when it shows Christopher Robin leaving his friends, growing up, and acclimating to the adult world. Once he reunites with  Winnie the Pooh, the laughs come. There is emotion built into the dialogue but nothing very sad. I think the film delivers in its sweet and cute comedic delivery. Thought the live action animals looked really great. Warmed up to the characters fairly quickly. There is a lack of plot, but its forgivable because this film is just a set up for Pooh and friends.

When it comes down to it, Marc Foster is a solid filmmaker and I think he has a real feel good film on his hands with Christopher Robin. I think if you like Winnie the Pooh and his group of friends, you will find great enjoyment in this film. I think its going to be enjoyable for both kids and adults alike. Its humorous, light-hearted, and all around lovely. I’m sure Disney will try to capitalize based on its box office revenue and get to work on a sequel.