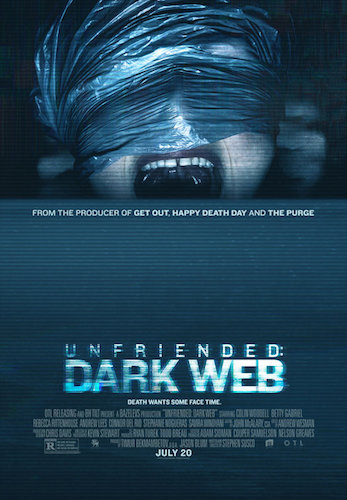 I actually really liked the first Unfriended. The film implemented a different storytelling technique, immersed fully as a  video call. It makes sense as these days social media is prevalent and a film like that was bound to come along. It was also timely, dealing with social issues like bullying. The sequel presents itself in a similar format but is unrelated to the original. I thought the film was stupidly entertaining but filled with dumb characters and a failure to capitalize on the first.

The film is about a group of friends who do a video chat hang out. One of the characters has recently acquired a new laptop (by stealing it). He soon finds out that the former owner wants the laptop back. The worst part is that the owner is mixed in the dark net, and this includes trading videos involving kidnapping and assaulting people. The entire union of online hacker criminals then starting picking off the friends one by one.

The film’s premise is different than the first. This one focuses more so on adults and a secret online society who do very illegal trading. I liked the idea and the use of a computer screen for almost the entire film. At times I liked the execution. I couldn’t get past how incredibly stupid most of the characters in the film are. Their decisions at times make no sense and they could avoid death but move towards it.

I did like the first film quite a bit and feel like this one does not quite live up to the first. There aren’t really any jump moments and this film felt less like horror and more like a thriller that plays out. Its not a bad film because its watchable. I just feel like characters were dumb and I doubt something like this could actually happen (maybe it can?). The film does enter unintentionally hilarious territory as well.