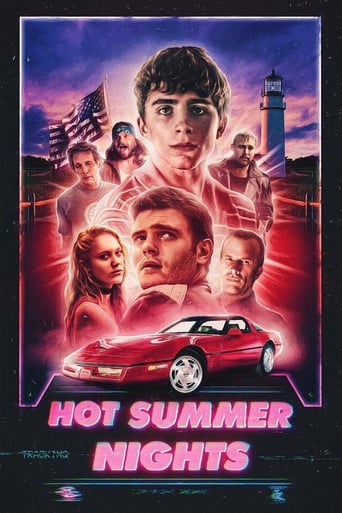 This film should have everything going for it. A coming of age film featuring two of the hottest young leads of today. An 80’s feel and vibe that should have made it a hit with people who like to feel that wave. It should really have been a film that I could enjoy. Unfortunately, I felt like Hot Summer Nights just got weaker as time went on and falls into genre cliches and fails to impress all around. Side note, Maika Monroe has my heart, good lord.

The film is about a kid in cape cod who links up with a rather aggressive friend who then decide to sell drugs and make good bank of off it. Along the way the lead Daniel Middleton, (Timothee Chalamet) falls in love with his partners sister (Maika Monroe). This causes waves as any type of relationship with her is strictly forbidden in her brothers eyes. Daniel has to balance his relationship and also deal with the dangers that arise in the risky business he finds himself in.

The film is well acted all around. Chalamet is obviously one of the top young actors going around. Maike Monroe is a nice talent that is emerging in these niche type creative horror films (she’s also absolutely smokin’ in this film as well). The two leads interaction and relationship is nice to watch but its ruined by a film that is high on nostalgic cliches and a typically 80’s soundtrack and mood that feels meshed in in a not so subtle manner. There’s just no creativity with this effort, it becomes a “been there seen that” type coming of age film that gets even more unimpressive as it goes along.

I was actually really looking forward to this film because it just had the marketing, vibe, and cast that should have made this film one of the best of the summer. Unfortunately, it fails to stir up any good feelings, isn’t paced well, and fades away without a second thought. I mean just look at that film poster, how do you fail that? The film truly exemplifies the worst parts of hot summer nights; sticky and gross.