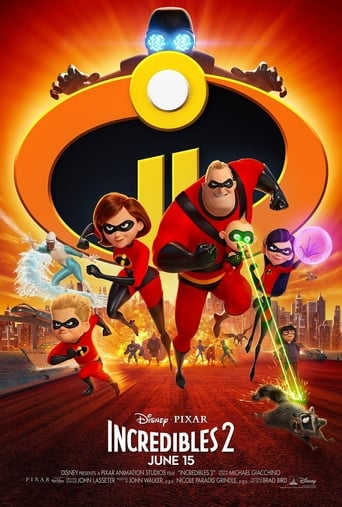 It took them 14 years to make it, but alas the sequel to the mega Pixar hit has arrived. I actually re-watched the original film the other day to refresh my memory. I have my favorite films from Pixar and while The Incredibles isn’t one of them its still a very fun film with an interesting spin on the superhero genre. Brad Bird and most of the voice cast return and the sequel is already a massive box office hit for Disney. While the sequel isn’t exactly necessary, its worthy enough and a fun time and is actually close in quality to the first.

The film picks up exactly where the original left off. Superheros are still banned, but a new initiative attempts to get superheros widely accepted again. This means that Elastigirl is out fighting crime while Mr. Incredible has to take care of the family and attend to homely duties. However, troubles arise when a mysterious foe named Screenslaver attempts to control people to push a dangerous anti-superhero agenda. Its once again up to the family to save the day.

Sequels that wait too long usually show age and don’t work as well. Take Super Troopers 2 and Dumb and Dumber Too for example. There isn’t really a discernible drop in quality with Incredibles 2. It hasn’t missed  a beat. Part of what makes this film fun is the MVP of it all, Baby Jack-Jack. His newly discovered range of powers are fun to watch and clearly provide the most laughs in the film. This was an excellent touch.

Something that makes the Incredibles endearing is the focal family. They have individual quirks and personality which are fun to watch. We have superhero fatigue at times in Hollywood yet Brad Bird and Pixar makes it feel fresh. It took a while to make but there aren’t too many complaints. The film brings fantastic visuals of action and a bunch of hero v. hero action. Its a worthy sequel from Pixar that does justice to its predecessor (something you can’t really say about Cars). A fun time will be had for all.