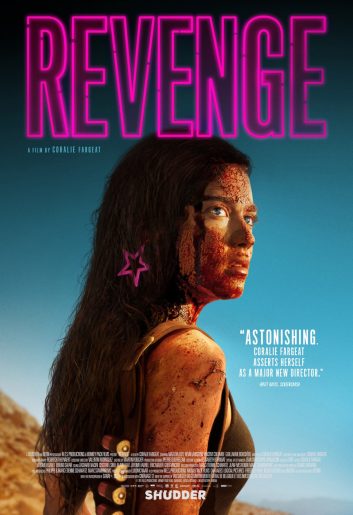 Briefly heard about this film a few weeks back and wanted to see it as soon as possible. Rape and revenge films are often good. I like A Spit on Your Grave (the original) quite a lot because of how effective it is and how powerful the revenge portion is. Same with the original Last House on the Left. This one is a mix of French and English and does a decent enough job while not holding back on the violence and gore which makes it ane effective take.

The film is about a girl named Jennifer who is having an affair with a French millionaire named Richard. They have a getaway in a home in the desert, where Richard’s two hunting friends also stop by. Richard’s friends ogle at Jennifer and eventually one of them rapes her. Richard’s course of action is to try to kill Jennifer by pushing her off a cliff. Somehow, She survives even though she is impaled . She then recovers and attempts to get revenge on the three men.

Matilda Lutz stars, who people will remember from the very bad Rings. She is a fairly good star in this though. The rape scene itself isn’t so hard to watch, its not as disturbing as something you’d see in I Spit on your Grave or Cannibal Holocaust. There is a lot of blood including showing fresh wounds with plenty of blood, stabbing in the eye, and heads getting blown off. This is all fine as it makes the film feel cartoony but in a good way. Its a necessary balance. The films tone isn’t really ever super serious as its sparse on dialogue and is more hallucinogenic.

Revenge basically meets the expectations that the trailer sets for it. Its not an acting clinic, but the stars get the job done and its a really simple rape and revenge film executed successfully. You can say the film has a real feminist element to it as displayed by the journey and development of the leading star and the change in her character. I’d say its worth a watch if you can stomach it.