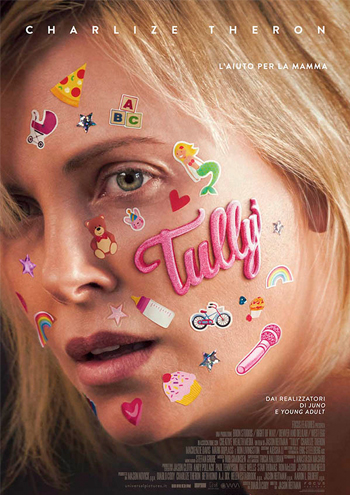 Getting past Avengers: Infinity War hangover was going to be tough, but there was a film that I was very hyped for this week. Tully. I do like Diablo Cody as a writer and her teaming up with Jason Reitman can bring quality entertainment. The trailer for Tully made the film seem like an extremely real and accurate portrayal of what parenthood comes with. Charlize Theron is pretty much always on point and I was excited to see her pair with Mackenzie Davis. Overall, I liked the film. It slows in moments but the entire third act makes the film worthwhile.

The film follows the life of Marlo, a recent mother of three whose life is mostly spent staying at home caring for her kids. Her relationship with her husband has been platonic for months and she is overworked and tired from the incredibly demanding efforts of taking care of her kids. She eventually decides to hire a night nanny named Tully and everything in her life changes. Marlo notices immediate changes in her life and Tully helps her explore the truth of her life, who she is, and what she wants.

Theron was typically good in this film. The fact of the matter is, say what you want about motherhood and raising children being a gift, it also comes with a toll. You see that in this film. There is hardship and it can effect a mother’s mental health. I think Mackenziie Davis was also excellent in a very free spirited and very quotable and insightful Tully. This is a sharp script that you just know came from the personal experience of Diablo Cody and is her best written film in a while.

While the film is solid, it wasn’t anything spectacular until the third act elevated the film. It hits you “like a garbage truck at 5 am” (a reference to the film, of course). A very welcome plot point occurs and really makes the film. Its an all around satisfying affair that won’t disappoint many. I’d really like to see Mackenzie Davis in more films as her talent in this was a high point as well. Watch the film and enjoy.

This is a text widget, which allows you to add text or HTML to your sidebar. You can use them to display text, links, images, HTML, or a combination of these. Edit them in the Widget section of the Customizer.
Loading Comments...
Comment
×
%d bloggers like this: