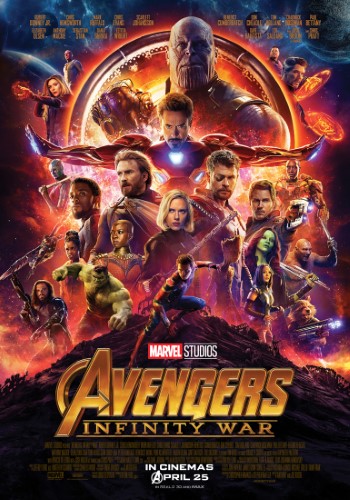 I can’t remember the last time I was so hyped for a film like this. Probably back in 2008 with the release of The Dark Knight. Well, ten years later here I was doing the same routine. Watching trailers over and over, avoiding all possible spoiler news about the film, and aching to watch it on opening day. Finally, the wait was over and I finally watched the film. While, I still don’t think its my personal favorite Marvel film despite expecting it to be, the film is overall a very good film despite its different tone. Furthermore, there are no plot spoilers in this review, there may be thoughts but no real spoilers.

The film is the next installment in the Marvel Cinematic Universe, which sees the Titan, Thanos, on a serious quest to find the Infinity Stones. The various stones let him control basic aspects of the world and make him powerful. The collection of all of them could change the universe drastically and make him the decider of anything that occurs Of course, The Avengers and surrounding heroes make it a mission to stop him and so we see our heroes unite (and split up) to attempt to take down this force that is unlike anything they’ve ever seen before.

There are a few negatives of the film but nothing that really bring down the quality of it so much. I think the Russo brothers did a generally good job of doing this ambitious crossover combining many characters from different films. However, some do not get enough screen time. Its nothing crazy, but it was expected. There are a lot of humor moments, most hit but not all. That might bother some of the viewers wanting less of that. Also, there are some major plot points that were dumb and questionable, not getting into it though.

I highly appreciated Josh Brolin as Thanos. One weakness of previous Marvel entries was a weak or generic villain. Finally we have one with a well fleshed out back story and one that is unpredictable. Thanos is legitimately threatening and you feel scared for the superheros when he is on screen. There are some moments that feel emotional and it ropes you in well. I feel like the tone and nature of this film is darker than anything in the MCU which I liked. Finally, things feel like they have consequences. The battles are for the most part fun and what you expect. The film is definitely incomplete because it was shot together with the next Avengers.

I have a lot more to say but feel worn out, in a  good way. The real strength of Infinity War is being able to see characters you love interacting with one another. Ten years of films, were all leading to this and you can tell the filmmakers but a lot of effort and heart into it. It won’t please everyone and does come with flaws and complaints but I think its an event that every comic book fan has to see in the theaters. I am ready for the hype for the next Avengers.