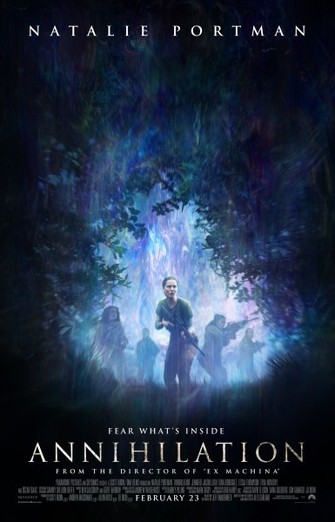 No relation to Mortal Kombat: Annihilation, fortunately. Alex Garland really blew me away with his directional debut with Ex Machina. Was an absolutely enthralling, smart sci-fi film that worked on so many levels. Naturally, I was very excited for Annihilation when I first saw the trailer. Natalie Portman is also one of my favorite actresses and one of the top performers working today so this was something I couldn’t wait to see. Having seen it, I have to say I’m still processing the film but its very good.

Lena (Portman) is a biologist who goes to explore a mysterious area called “The Shimmer” with four other women. Her husband recently came back after a year of being in the Shimmer and he has been acting and reacting oddly. Lena soon realizes that the world within the Shimmer is odd; plants and animals mutate unnaturally and the landscapes are ever changing. There’s much more to talk about plot wise in this film bt I’d rather not spoil anything at all.

First of all, visually this film looks great. As Garland says, its made for the big screen. I’m not that crazy about films premiering on Netflix and stuff so it sucks this film won’t get an international release. Second, the film is slow but brooding and thriving in its complexities. It sort of reminded me of Arrival at certain stages. The film takes you on a visual and conceptual journey, whether you are coherently following along or not. Portman and Jennifer Jason Leigh shine, as usual.

I can tell a lot of people are going to write this film off as bad. I can already see that the right people are praising it and giving the film the due it deserves. Garland delivers an unflinching smart sci-fi thriller that stays with you. Its well acted and has interesting concepts that don’t always make perfect sense, yet are mind bendingly entertaining. Ex Machina is a better film but Garland follows up with something close in quality. I’m certain that after a re-watch this film will get an 8 from me.