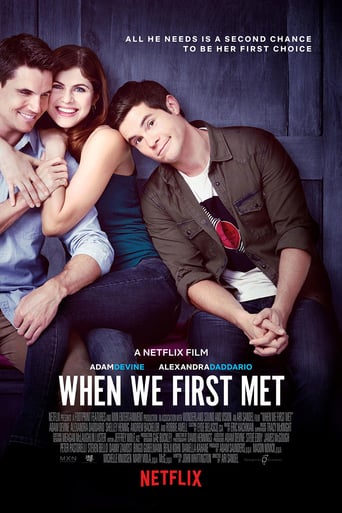 When We First Met

I have a strong eh feeling for “Netflix original films”, some impress most fall flat. The original shows are good, most of the films feel like direct to video and its easy to see why the films don’t come to theaters. I had some real hesitation checking When We First Met for two reasons. One, I didn’t take confidence in seeing Adam Devine (who is decent in doses) as a leading man. Second, I found the time loop/reliving the same day storyline a little stale since there’s been some recent frequent takes on it. Oddly and surprisingly, I had a good time with this one.

The film is about a man named Noah (Devine), who meets the girl of his dreams at a Halloween Party. Three years pass and he has to watch her get engaged to another man. He soon discovers that returning to a photo booth at a jazz bar allows him to travel back in time and relive that Halloween and change his future. Naturally, things go wrong as he tries to woo the girl that he wants most and we get a nice laugh out of Noah’s trials and tribulations.

The film had a few funny moments. Some of them caused me to laugh out loud. Devine really worked as a leading man, a lot of the funny would not have been possible with out his unique delivery. The time loop nature of the film wasn’t so annoying. I mean, there were times where I felt the story dragged out but it wasn’t so easy to predict how Noah was going to get the right formula to end up with the girl he loves. Overall, I can’t deny that I was interested the whole way through.

I do have a criticism that is kind of unrelated to the film. Why are internet stars like Andre Bachelor (who got famous off of vines) in so many movies now? I saw him do one with Logan Paul ffs. Yeah, lets keep it it real actors please. A fun time overall, I want to see Netflix bring more quality programming and not some hot garbage (Cloverfield Paradox, I’m looking at you).