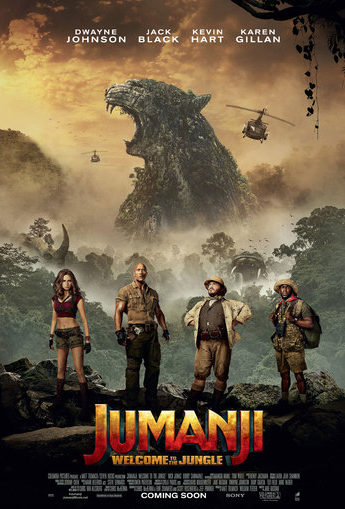 Jumanji: Welcome to the Jungle

The original Jumanji is a nostalgic film from my childhood. It still held up when I rewatched it earlier this month. The effects aren’t the greatest but the film was fun and had a lot of heart. I was not one of those annoying people who had pitchforks out when they heard about Jumanji being rebooted or getting a sequel. Always give a film a chance, that’s what I do. After seeing promo pics and trailers I was hyped. I like The Rock and Kevin Hart working together, and also love Karen Gillan. The film looked like a fresh spin on the original and even looked like an effort that wanted to stand on its own. It does exactly that. Say what you want, this is a very fun film.

Four different teenagers are given detention and once there they discover an old video game named Jumanji. They plug the game system in and are sucked into the world of Jumanji, primarily in a jungle where they must return a jewel into an enormous Jaguar statue. Sounds easy, but the jungle is filled with tricks and traps and wild animals. Oh yeah, the four characters become the characters in the game physically. This makes for a very entertaining time with almost non stop humor on top of its adventure.

The actors do very well in this. Jack Black and Kevin Hart bring the comedy. Jack Black’s character is actually the embodiment of a self absorbed teenage girl, and he plays that remarkably well. I dig Kevin Hart with his loud commentary. I also love that he’s always getting knocked over thrown around, in the way of danger, or in this films case- explodes. All the humor in this film comes at you tenfold and it all works. The story keeps you on the edge of your seat and, while somewhat predictable its never boring. The action scenes are gripping and grand scale. I loved the world of the film and the connection between the characters.

The film has a few nods to the original but the film is still quite independent from the original which is nice. Really its in name alone; the connection to the first. Overall, its a blast at the end of the year. Its a re-watchable and exciting comedy/adventure. Take off your critical lenses and actually sit and enjoy this. The negative things I’m reading about this are analyzing it on such a deep level. Dude, relax and enjoy.