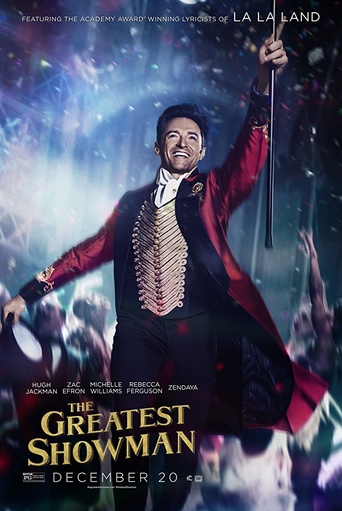 Alas, the holiday season is upon us and with that the holiday season of films. A nice mix of buzzworthy films and Oscar hopefuls, this time of year is wonderful for cinephiles. I was mildly interested in checking this film out because it looked like a capable musical. After La La Land, you had to expect more musicals attempting to emulate that film’s success. I have no problem with that, I have plenty of time for all times of films. The Greatest Showman stumbles on problems with its script and storytelling but make no mistake about this film having a glorious soundtrack and fantastic production and set design.

The film is (apparently a rather loose) telling of the story of P.T. Barnum and his struggle to make something for himself and his family. His initial idea of a museum isn’t a success but he get’s the idea of an innovative form of entertainment involving unique individuals with rare talents formerly shunned as outcasts of society. Yes, this becomes the modern day circus. I don’t know exactly how truthful this is to the original story but I sensed that this film is heavy on dramatization and made things more peachy and roses than they might have been.

The plot is thin, there isn’t a whole lot of development of side characters and you will feel like this film falls short ass a well written musical, like that of La La Land. It’s well written in the sense that the songs in the film are quite excellent. Catchy, elegant, and near impeccable in sound , the soundtrack roars and impresses. The same has to be said about the choreography, the dance numbers, costume design, and the glitz and glamor of the early 90’s and the grand circus theme. Its honestly a visual and sonic experience that’s worth the watch alone.

I also liked the fact that this film doesn’t overstay its welcome with an under two hour running length. It sort of zooms by and perhaps could have added more meat to its bare story but I’ll take that over a long and dreary musical that becomes dull because of its length. The Greatest Showman may get lost in the award season shuffle but it does its job of being a fun time.