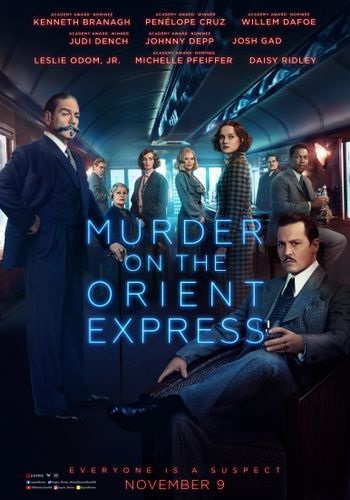 Murder on The Orient Express

I remember enjoying Sidney Lumet’s original adaptation of Agatha Christie’s novel. It felt long, but was thoroughly entertaining. The remake had me slightly intrigued. Mostly because it had a really good cast to boot. I’m not the biggest fan of Kenneth Branagh’s directional efforts, though I quite liked the live action Cinderella remake. With this film, we have a rather dull and uninspiring effort that does little to warrant its creation. It looks nice but feels like a wasted effort.

The film follows “the greatest detective in the world” Hercule Poirot as he is stranded on a train with other passengers. One night a murder occurs as one of the passengers is stabbed to death. It is up to Poirot to find out who committed the crime, while realizing the passengers on the train may not be as random and innocent as they seem. Branagh both directs and takes the lead role of Poirot in the film.

That’s kind of where the problem lies. Branagh as Poirot takes center stage, and its a little too centered. There is a real talented cast here, that is not much more than background characters with limited material. Judi Dench is in the film and is rarely involved with screen time. I think Branagh is good as Poirot but the film kind of plods along and doesn’t garner enough interest or shock as it goes along. The film feels like it just states the plot without delivering it for the audience.

The film remains quite faithful to the novel and is closely similar to Lumet’s adaptation. I wanted more liberties taken to provide for a worthy and innovative adaptation but I can understand why it isn’t that way. The film does not make use of its potential, and is an inferior adaptation of the novel. The visuals and picture is prim and proper but the film derails along the way which is unfortunate.