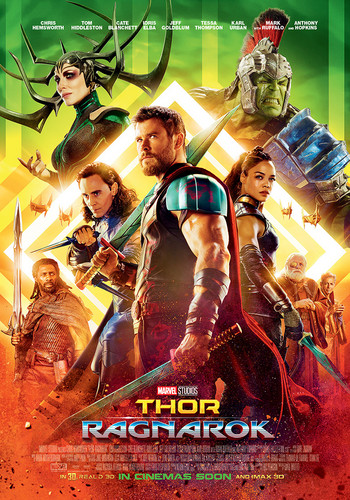 Admittedly, I’m not really a fan of the Thor films. I like Chris Hemsworth as Thor and an Avenger, but the films never drew my interest. Trailers for this looked good as it seemed to be more concerned with an adventurous and humorous time. Which is why Taika Waititi coming on board was a good move. What We Do in the Shadows is absolutely hilarious, and him in the MCU could have provided fun for a franchise that didn’t have much of it previously. All in all, I’ve got to say this film is such a good time.

This film takes place after the events of Avengers: Age of Ultron and around the same time as Captain America: Civil War. Asgard is under siege by a new threat, a menacing and powerful sibling of Thor named Hela. Along the way Thor is enslaved on a  planet where gladiator type battles occur and he tries to get Hulk and a bounty hunter named Valkyrie to band with him to save Asgard. Oh yeah, and we’ve got more Thor and Loki goodness too.

The film actually looks gorgeous in the theaters. The scenes with Asgard especially. The choreographed fights are all excellent. The soundtrack (with Led Zeppelin’s thunderous Immigrant Song) make the action a sonic and visual feat. The film is so much fun. There are jokes everywhere, many at the expense of Thor himself. It all works though. These films are ridiculous, and we should be able to laugh at it more often. Its probably the most light hearted entry in the MCU yet. Its probably the most re-watchable entry in this Universe because of that.

Character development is quite sufficient at all ends. Thor is hammerless without most of the film but taps the inspiration of Odin to enable his true godly power. Loki is still conniving and narcissistic but you can’t help but love it. Hulk isn’t one of my favorite Avengers but even he is a welcome part of all the screen time he gets. Cate Blanchett is obviously a phenomenal actress but I was quite curious to see her in a superhero film. She’s absolutely great. One of the most memorable villains in the MCU.

Let’s also not forget Jeff Goldblum’s Grandmaster. The film fires at all fronts. It’s miles and away the best Thor film made, and gives Captain America: Civil War a real run for its money. Ragnarok has vastly now improved the Thor films which is what I was hoping for. Phase 3 is in full swing going into Infinity War. There are so many elements and heroes in this Marvel Universe but I’m excited to see what can be don with it all.