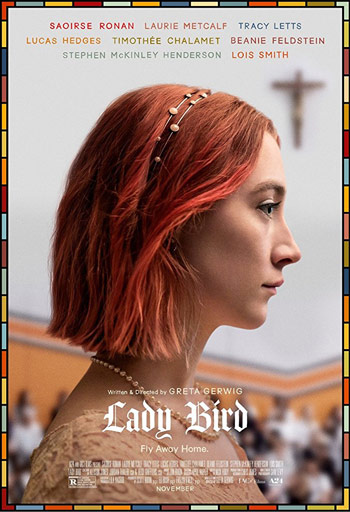 This film received very high praise from early screenings and it wasn’t hard to see why. Saoirse Ronan is a star, absolutely blowing everyone away in Brooklyn. Then you have Greta Gerwig, a force in a few Noah Baumbach films, with a highly anticipated directional debut. Was incredibly hyped for this one all the way through. It feels short because the film just flies by but its rather excellent. Very satisfied with the turnout for this one.

The film is about Christine McPherson (Ronan) who has given herself the name “Lady Bird”. She is a high school senior in a Catholic school who struggles through what a typical girl of that age goes through. She faces the trials and tribulations of dating boys, losing her virginity, trying to be popular, feuding with her best friend and mother, and ultimately trying to figure out what to do with her life. Things are tough for her and she examines her relationships with friends and family to ultimately come to the best decision for herself.

The film sounds like a typical film plot. In many ways it is. Yet everything about the film is done so well in the expert hands of novice filmmaker Greta Gerwig. The dialogue is sharp, hilarious, and witty. The character development, interaction, and acting are all strong. Saoirse Ronan is at the very least sealing an Oscar nomination for best actress and might even go on to win it. It seemed like such an effortless performance for a girl who completely disappears into the character idiosyncrasies of Lady Bird. Its a wonderful coming of age film that hits all the check marks and does so very effectively.

I can’t think of any complaints. The film feels so real and identifiable. Its exactly what you want and is a very impressive debut from Gerwig. The film has a nice touch at the end and does what it needs to do to remain funny and touching. I don’t mind a good coming of age comedy every year (Edge of Seventeen taking the cake last year). I expect this to be an award contender for at the very least Ronan’s performance and Gerwigs writing and directing.