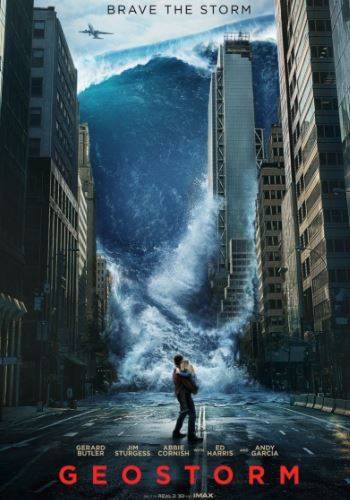 As soon as the trailer dropped I knew this film would be a joke. In recent years, Gerard Butler has become a king of being in hammy, corny, films so I knew this would be just about the same. I actually do like global disaster films no matter how cheesy the films usually tend to be. I knew not to expect much and just sit back and enjoy large scale cinematic disaster. After viewing the film, I am actually disappointed. The film stays too focused on  its political themes, conspiracy, and character dialogue than something that should focus on its disaster element.

The film is about a scientist who has to travel to space to fix ‘Dutchboy’ a satellite network that controls global climate in space. However, someone has been manipulating the satellites causing large scale climactic disaster around the world. The mystery runs deep basing itself on a political level. Its up to the scientist and his once estranged brother to save the planet from a geostorm that is threatening to destroy the planet in its entirety.

The film does not offer enough disaster, straight up. I enjoyed 2012 (through its stupidity) because it offered many scenes of global destruction. This film shies away from it and only offers it in doses. Its the main reason anyone wants to watch the film. Yet we are subjected to far too much character moments, an on the nose political agenda, and a very generic political conspiracy that is actually really easy to solve.  You’ve seen it all before, you will leave the theater completely forgetting the experience.

You can see why this film was in developmental hell for a bit, there’s just not a whole lot going on that can warrant your attention. Gravity did all the space scenes better and this film felt like it wanted to rip a few scenes. The actual disaster from weather scenes look nice but as mentioned before they don’t come often and do little to add to a film that doesn’t have a whole lot else going for it. I didn’t expect much but still managed to be disappointed.