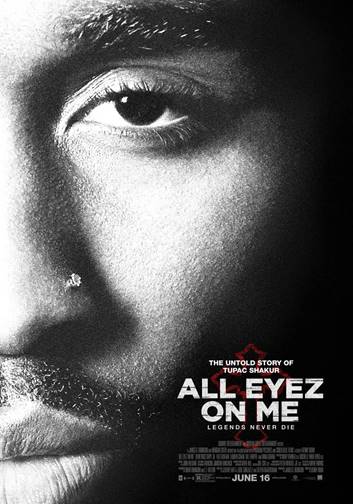 All Eyez on Me

I meant to see this in theaters when it first came out but the very negative reviews kind of turned me away. I really liked Straight Outta Compton. While the film wasn’t perfect and did tail off at the end it was overall a well casted, gripping biopic about the most influential hip hop group of all time. In the same way I expected a film about Tupac to be of similar quality. However, the trailers and promotion from this weren’t exciting and nor was the film.

The film is a standard biopic covering most of the important aspects of the life of Tupac Shakur, starting with the activist life of his mother Afeni, and going into moments of his youth growing up, followed by his success, controversy, and his ultimate death. The film uses (from what my ears could tell) original music from Tupac and had cast other important celebrity figures in Pac’s life. My main positive about the film is Demetrius Shipp Jr. looks the part and does really well in his portrayal. I also really liked the re-enactment of Tupac’s ultimately fatal shooting. Outside of that its hard to think of too many things I liked.

The film just bumps through events. You never get the real feel of emotion or authenticity to events. I know I shouldn’t keep comparing this to Straight Outta Compton but its hard not to. John Singleton was supposed to be in charge of writing and directing this film and I wish that were the case. Shipp Jr. is great but mostly everyone around him is not. What the hell at the portrayal of Snoop and Dre. At least Suge Knight looked the part and they got the same actor to play Biggie from Notorious. Even Notorious was a better biopic. Some of the dialogue is reminiscent of those star biopics on the Lifetime network.

The film glazes over most events without digging deep. For a film that’s almost 2 and a half hours long, this was disappointing. A scene occurs and then cuts to the next one without really setting a story, I had problems with this editing. There is just no punch or justice done to a rapper who deserved something way better. If you aren’t a fan of Tupac and see this film you may not even find him to be an identifiable character nor really care about his legacy.