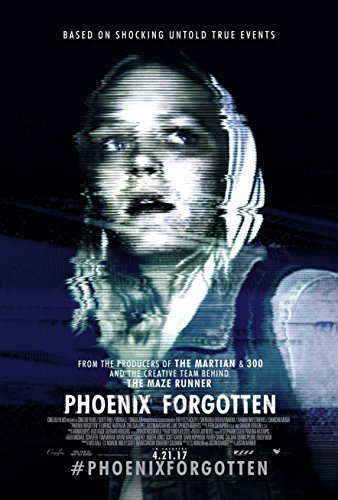 I may seem to have an interest in everything but I am honestly pretty fascinated with things associated with UFO sightings. When I first learned about the Phoenix Lights sighting I was so infatuated with it, the explanations for it, the mystery associated with it, and also was curious as to why people weren’t talking enough about it. Was it really a military aircraft? If so, has there been a complete explanation as to what kind of aircraft could cause lights like that and then disappear into thin air. I’ll do more research into events from that night on my own time since it doesn’t have a whole lot to do with this film. Where do I start with this film? Let me just start off by saying this film is not very good.

The film is about a sister who looks for an explanation as to the disappearance of her brother and his two friends back in 1997 when they went to explore the mystery of the Phoenix Lights. The film splices back and forth between the present day and found footage of tapes from her brother, including tapes that explains the final hours of the three missing teens. Does this sound familiar? It should. Its basically Blair Witch Project-lite. Nowhere near as good though. I loved the Blair Witch Project. For its time it was genuinely scary, felt so authentic (helped by the clever “true story” marketing), and put found footage films on the map (for better or for worse).

That same type of true story marketing does not work as it did with Blair Witch Project. We live in the technology age now, stop trying to market films as”true” when people can just see an actor’s IMDB or do a simple google search to find out otherwise. That isn’t the real complaint of the film though. The film is formulaic; you’ve seen this exact tale ten times before. Not only is it predictable, it offers very little substance at the end as an “explanation.” The going back from present day with the sister and the past events was tacky and left things feeling unfocused.

The film at the very least didn’t go for the tired technique of doing found footage jump scares. Nothing more annoying than that. There is intrigue surrounding the event, sure. I don’t know if it warranted a film like this though. Its actually quite thin. The last ten minutes is really where its at, and it still turns out to be a disappointment. These type of films don’t prosper anymore, especially in this day and age. I welcome a really good one like Blair Witch Project or Cloverfield but creativity and unique attempt seems to be dead in this genre unfortunately.