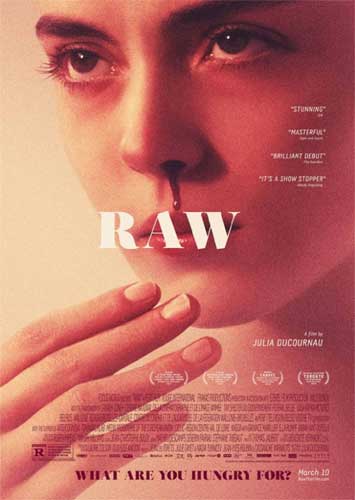 Such an apt title for a film. I can’t think of another word that would describe this film so accurately. I meant to watch this when it was in the theaters but wasn’t able to. Then I started hearing people being disgusted by it and others raving about it. Naturally, I had to check it out. What I gathered is the film involving cannibalism and being sexually and erotically charged. I was right on both counts. I am quite pleased with this film. It’ll leave you feeling disgusted but in a positive way (if that makes a word of sense).

The film takes place during hazing week at a veterinarian school and follows a girl named Justine. She has been a lifelong vegetarian and during the hazing rituals at the school she meets her sister and also has her first taste of raw meat. From there her appetite for meat grows and becomes almost animialistic. Her taste for meat grows to a desire to try human flesh. While she’s at odds at first with her cannibalistic nature, she soon gives in to her primitive nature and along the way becomes carnally charged along with having  a matching sexual appetite.

First off I think the actress who plays Justine deserves some praise. Garance Marillier is a fresh face, especially to American audiences. She starts off being an innocent and unknowing virgin and then ends the film became a sexually hungry vixen who will bite. She grows as a character as the film progresses, just like her voracious appetite. The film offers blood, rashes on human bodies, and mauled and torn body parts; if you can’t stomach that you may miss out on a good portion of what makes this film so wild.

I think the film pushes some boundaries but still remains within a comfortable realm. Its not the most craziest thing I’ve seen; probably not even top ten. However, it offers a fantastic look into the growth of a young girl into some sort of a human feeding monster and its done in a cinematically beautiful way.  I love that one review I read stated this film was “Suspiria meets Ginger Snaps”. This is actually the best way to describe this picture. Promising work for the two lead actresses and the director involved.