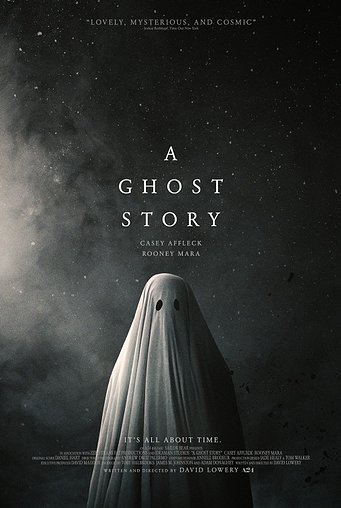 If you know me well, you know I will go out of my way to watch every Rooney Mara film in existence. I was puzzled by the trailer for this one but at the same time excited to see David Lowery reunite with both Rooney and Casey Affleck  (they all previously worked on Ain’t Them Bodies Saints). Having now seen A Ghost Story and letting it sink in I can say that I am very impressed by the minimalist structure and beautifully haunting experience that I have experienced. While I’m still trying to unpack some aspects of the film, I’m already beaming about a re-watch.

The film follows a couple played by Mara and Affleck. One day Afflecks unnamed character dies in a car accident. We then see his body reanimated as a ghost under an ominous white morgue sheet. He then returns to the house he and his girlfriend lived in and watches Mara and how her life progresses as she deals with the loss of a loved one. The film carries on long after the girlfriend moves and the house goes through new inhabitants ultimately leading to the destruction of the house and the building of a skyscraper against a futuristic backdrop.

I wasn’t a giant fan of the use of the 1:33:1 aspect ratio but I can definitely see the sense of being “trapped in a box” that he was going for. I plan to buy this film on Blu-ray so I probably would have liked a more fuller ratio. And with that ends my criticism of this film. A Ghost Story is presented in a minimalist fashion. The dialogue is sparse, the film had a small budget, the script is also direct and straightforward. Yet the film is so complex. The film is an excellent portrayal of loneliness and despair. The scene with Rooney Mara stress eating (or for lack of a better term: grief eating) a pie is pure and raw emotion. She doesn’t have to say much but she perfectly portrays a grieving woman who is so withdrawn and alone. Believe it or not, Casey Affleck under the sheet is pretty incredible as well. You don’t see him for 85% of the film yet you know exactly when his ghost is feeling rage, grief, and longing. Apparently the eye shape on the sheet changes to convey different emotions. This is something I’ll have to study upon a second watch.

The film is shot so beautifully. Its such haunting cinematography; seeing an ominous looking ghost in a white sheet on screen in the corner and yet this film isn’t a horror film in the typical sense. Yes the film is about a ghost and there are some scenes that can be deemed scary but its chilling and haunting in a beautiful way. The film digs deep into you and keeps you wondering what exactly will happen to Affleck’s ghost character. Lowery abandons conventional structure for this film and portrays a story from minimal set pieces. There is a cyclical nature to the film and also a portrayal of never ending time and the changes that come and go. The last 20 or so minutes are just perfect.

I still do not feel like I fully understand the ending of the film. That is the beauty of the film, I think there is room for interpretation. I enjoyed Ain’t Them Bodies Saints, but this was just a whole new level of masterful from David Lowery. The film is deceivingly strong and is a fantastic exploration into love and loss. I hope to see a trilogy of films with Mara, Lowery, and Affleck because this film was an engulfing experience for me and one that I can’t wait to come back to.