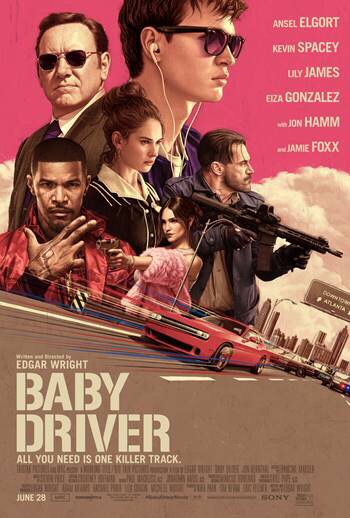 I’m not the biggest Edgar Wright fan but man, I saw the trailer for this and I knew I had to see this as soon as I could. Everything about it seemed like a good time. I like the Three Flavours Cornetto trilogy, each film is funny and solid. I absolutely loathed Scott Pilgrim vs The World though and thought it was terrible. I was hoping for the best Wright ever made with Baby Driver and its pretty nice to say I think we are there with this film. I had pretty high hopes and have to say while the film isn’t perfect and struggles a bit at the end its still a satisfying ride.

The film follows a quiet but expert heist driver named Baby, and his toils in life which include finding love and the high risk/high reward lifestyle he lives as a getaway driver. Baby is constantly listening to music on different iPods to drown out the sound of tinnitus he developed during a traumatic childhood car accident which killed his parents. I really loved the interactions between Baby (Elgort) and Debora (James). I loved Lily James in Cinderella but I love her even more as the innocent waitress in love here. Side note, but holy cow she really looks like prime Shelly Johnson from Twin Peaks in this.

I have to say Edgar Wright puts a wonderful spin on a heist film. Unlike his previous films, the film is really light on comedy and is solely action and style. Its great though. The car weaving scenes are very fun to watch, action scenes edited quite well. As with previous bank heist films the action brings it either with the guns or the frenetic car chases. I have yet to really like Ansel Elgort in something, but this has to be the film that’s going to make him a star. I love the characters in this film. Spacey works so well as the leading mastermind behind the heists. Jon Hamm in a villainous role works just as well as Jamie Foxx as Bats. Eiza González is new to me but wow is she such a gorgeous actress, I may actually take up the From Dusk Till Dawn series now.

The best touch in the creation of this film is the ever present soundtrack. Almost every part of the film is accompanied by Baby’s iPod song. Its fantastically eclectic and does well to keep pace with the film and accompany different moods and themes as the film progresses. Things get a little messy near the end but I think Edgar Wright is somehow still able to keep it coherent and crazy till the end. This is the type of film that needs a second watch. Its possible that it will go down in in rating on a re-watch. However, its also equally possible for this to enter a personal cult status with another viewing. I’d say Edgar Wright did very well with this one.