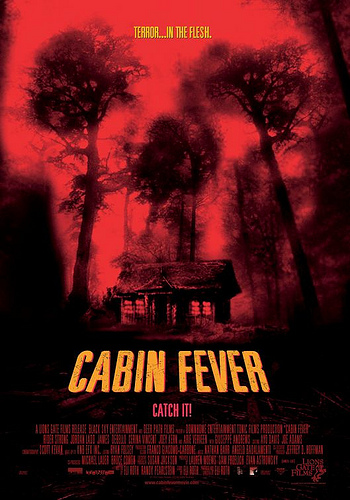 I saw this once before way back when and remember enjoying it. A lot of people don’t like the work of Eli Roth. I don’t think he is an amazing director or anything but I did enjoy Knock Knock and Hostel immensely. His films are often stupidly cheesy and full of graphic violence but I can appreciate that, the lowest form of entertaintment. I knew I had to revisit this film after watching the terrible 2016 reboot (why the hell did that happen).

The story of the film is quite simple. It’s about 5 friends who are vacationing at a cabin. Little do they know that there is a type of flesh eating disease spreading around in the area that makes people’s skin fall off. They also later find out that it is being spread through water. The film definitely is influenced by The Texas Chainsaw Massacre and The Evil Dead but this film is definitely of that calibre. It’s still a dumb enjoyable bloodfest. Which is what is expected from this director.

The scares (the few that are present) don’t really work and use the often  played out jarring sound as something pops up. The blood and makeup is quite good. The skin falling off looks quite real and some of it really does make your skin crawl. The dialogue is so dumb and you get the typical prototype of dumb sex fueled teens who get themselves into trouble (as is par with horror films).

The cast aren’t particularly great although it was nice to see Rider Strong in a lead role. Jordan Ladd kind of faded into obscurity soon after. The film also has a cameo from Eli Roth, who basically plays an idiot. It’s a truly dumb film but mindlessly entertaining. I don’t think it’s Roth’s best (Knock Knock has definitely taken that cake) but it’s an entertaining bloody debut.