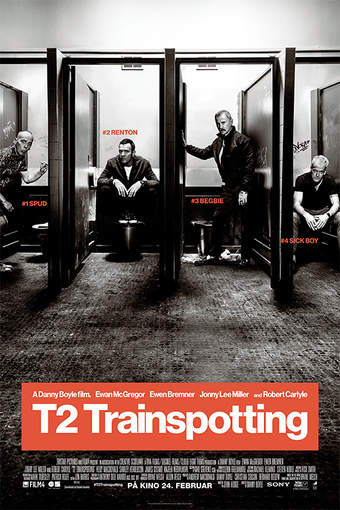 I wasn’t always a fan of Danny Boyle’s films until I saw Sunshine and he blew me away with what turned out to be one of my favorite space films. Then he came out with Slumdog which was generic trash but later redeemed himself with Steve Jobs (mostly due to a wonderful script by Aaron Sorkin). I unfortunately can’t remember what I thought of the first Trainspotting so I didn’t really look forward to the sequel although I would still check it out because I’ll watch literally everything. After viewing the film I’ve got to say its quite good and I find myself wanting to go back to the original just to see which is superior.

The film takes place 20 years after the incidents of the first film. Renton is trying to reunite and make amends with his old friends. Spud is down out of luck and suicidal. Sick Boy has set up a blackmailing business along with his prostitute girlfriend. And Begbie escapes prison and is out for revenge against Renton. Its quite easy to pick up on what’s going on in the film even if you can’t remember the first. This film would actually rank quite high in the filmography of Boyle.

The film uses many callbacks to the first film in soundtrack, style and quite literally in the picture. The film utilizes flashbacks and transposing of incidents from the first film into the current frame. The film is un-apologetically fueled with crass language, sex drugs, and violence; its basically you would expect from the film. Its nice to see Robert Carlyle in something that’s not that shitty Once Upon a Time show, he’s a talented guy who should be in more good things.

The film is entertaining from start to finish. The characters are great, memorable and unique in their own ways. There’s a lack of Kelly Macdonald in the film but its all good since it thrives in other places. I think the finish of the film is nice, its a great tribute to the first film. I also really liked the entire scene with the updated “choose life” speech. I think if you’re a fan of Trainspotting you’ll be quite pleased with this product. The story has enough life for a third film even to cap off a trilogy. Maybe in another 20 years.