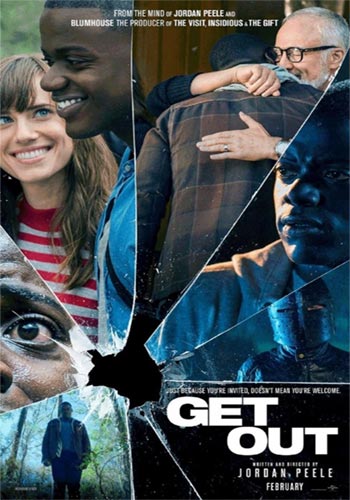 I am a huge fan of Jordan Peele. I loved Key and Peele and loved that the duo stepped into making a film with a pretty good comedy in Keanu. All that said I had some strong reservations about Jordan Peele stepping out of his comedic element and into a horror especially one that is psychological. I didn’t know what to make of the trailer. I was thinking that this had to be one of those “horrors with humor”, I just couldn’t see Peele stepping that far out of his comfort zone. While I feel this film gets overrated by the masses, its quite a successful venture for Peele.

The film follows a black man named Chris and his white girlfriend Rose. Rose decides to introduce her boyfriend to her family. While everything seems peachy at first it soon becomes obvious to Chris that something is way wrong. The black workers in the house act so weird and reserved and the extended family and friends of Rose are far too intrigued by Chris and the color of his skin. While I won’t divulge any deeper into the plot, I’d say this was a fairly satisfying film. Its an interesting effort by Peele, that has some real world relativism.

The scares are predictable and come in moments that are exactly where we expect them to be. The film still keeps you engaged and entertained and coming up with theories of your own as you go along for the right. The film is kind of predictable at least the main arc of what is actually going on with the family. That really doesn’t take away from what is given. There is a fair bit of nice imagery, which goes to show some of the creativity Peele had for this. The social and racial aspect of this film can’t be denied, its a bit of a social commentary.

This will probably be a breakout role for Kaluuya, he’s come a long way from that episode of Black Mirror. The film received higher praise than i think it deserves but it does a good job at being a thrilling and engaging film. I am very optimistic about seeing whatever Jordan Peele decides to do next because I am certain now that he is very capable of going outside the comedy box.