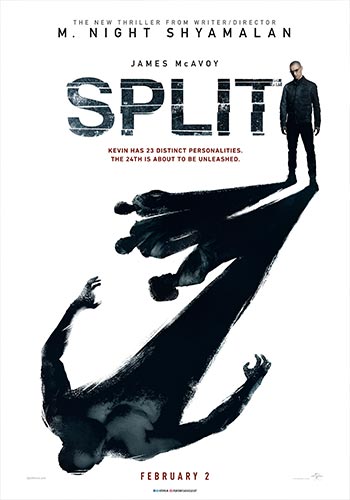 I was once a fan of M Night Shyamalan. I absolutely love The Village and Signs and feel he was on a fantastic creative run at one point. That ended when he made The Happening and then even worse, The Last Airbender. I thought The Visit was a nice reminder that he could bring forth an entertainingly thrilling film. I was hoping Split would give me the satisfaction of being comparable to M Nights’ glory days but I am sad to say I am disappointed.

The film is about three teenage girls who are unexpectedly kidnapped in a parking lot by a mentally ill man with dissociative identity disorder. He has 23 different personalities and a 24th called the beast which seems to be the most threatening of them all. The hype for this one seemed to be real and I heard many raving about it but I didn’t have fun during this film.I know many won’t agree with some of my criticisms but I wish I could have liked this more.

First of all the film should have been shorter. There were areas of the film that dragged. M Night was trying to build tense moments , a lot of which I felt fell short and were worn out. I have a background in psychology and know of dissociative identity disorder but am certain that a lot of the elements of it were fantastical. Too many personalities and that final form stuff just doesn’t gel well and borders on silly. Not to mention the shift between characters feels incoherent at times. Saying all that I have to say that James McAvoy is absolutely superb in this. Like so alluringly good. I’m glad an actor of his caliber was able to showcase his range and ability although I wish the film was written better.

The transpiring of some of the events were so stupid. There are a few plot holes but I couldn’t ever  really sit back and enjoy the film. The three actresses did a decent job, Anya Taylor-Joy will certainly become a big name but I have a hard time getting over the implausibility and the buildup to the final act. I don’t want to say anything that will spoil it for other viewers but the ending is pretty cool and a nice callback to a time where M Night was on top of his craft.