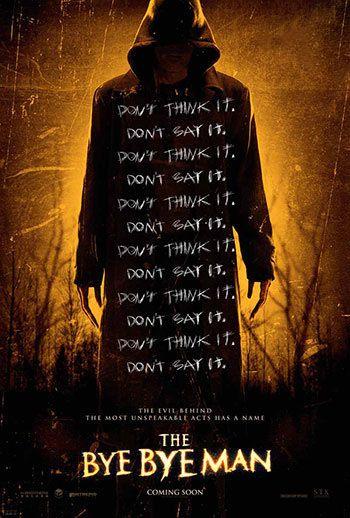 Don’t think it. Don’t say it. Don’t say it, don’t think it. DON’T WATCH IT. What an awful awful film. This is a movie that you would see on the Chiller network (not a knock on the network). Its a completely generic,  non-entertaining, ridiculously stupid waste of time. I went in with a clean slate (apart from thinking the title of the film was laughably dumb) and came out feeling like I really should have known better.

The film is about a group of friends that seem to be haunted by a presence known as The Bye Bye Man. This monstrous being has history connected to previous grizzly murders and now this group need to end the Bye Bye Man. Sounds dumb enough, and it is. The three lead characters are terrible. You want them to die. There are shallow, generic, infuriatingly boring and bland. Sometimes you get that with horror films, but I at least want to get behind the characters. Some of the characters and actions are so stupid that I was praying for their characters death. And when it came it was well deserved because of how dumb they are. I’m talking about a specific scene with a train at a railway crossing.

The film has nothing amazing going for it visually. The scares (if you can call it that) are so manufactured and tried that even if this was your first horror movie, you still would see it all coming. You want to laugh at how stupid the concept, name, and presence of the being is. Its not even in the so bad its good territory which is a shame because with something with a title like this it should have gone all out in the cheese department.

I’ve been very hard on this film. Its a January release, which is basically the graveyard of Hollywood films. Pretty certain that no one had any faith in this film, and I can see why. You can give me a pen and a pad and a camera and I can write you a more convincing horror film that this. At the very least we have memes of the catchphrase for this film. if anything, its going to go down as a giant joke. Its what it deserves.